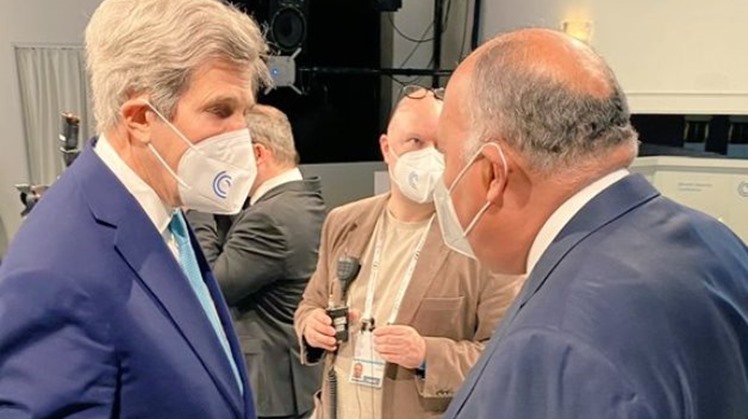 Both leaders were participating as keynote speakers in a session on international climate diplomacy, on the sidelines of the MSC.

John Kerry will arrive in Cairo on Sunday for a two-day visit, to tackle climate change-related issues, according to a statement from the US Department of State on Friday evening.

Secretary Kerry will deliver an address at American University in Cairo on the future of international climate action in the leadup to the Climate Change Conference (COP27) due to convene in Sharm El-Sheikh in November 2022. The remarks will be livestreamed at aucegypt.edu/streaming.

“Together with Egyptian Foreign Minister Sameh Shoukry [the COP27 President-Designate], Secretary Kerry will launch the inaugural meeting of the U.S.-Egypt Climate Working Group, a joint endeavor to advance bilateral and multilateral climate goals ahead of COP27,” the statement read.

On January 27, 2022, Egyptian Minister of Environment Yasmine Fouad made a phone call with John Kerry, discussing bilateral relations between the two countries and Egypt's preparations for hosting the COP27.

The Minister of Environment confirmed that both sides agreed on the importance of building on the outcomes of the 26th UN Climate Change Conference (COP 26) and working on implementing issues related to mitigation, adaptation and climate finance, and the need to fulfill the pledges of developed countries to provide the necessary funding.

Fouad said that she discussed the joint cooperation program between Egypt and the US in projects that help address the climate change impacts, within the framework of Egypt’s National Climate Change Strategy 2050.

Both sides also agreed to cooperate in adaptation projects, and the possibility of the private sector’s participating in climate projects in Egypt, particularly in the energy field.

Over the phone call, Kerry affirmed the United States' keenness to support Egypt during its presidency of the COP 27 and to provide the necessary support for a successful outcome of the conference.

He added that the US would cooperate with some countries like Indonesia, Mexico, India and South Africa to support their actions in addressing climate change impacts in, for instance, the energy program.

Egypt's FM affirms to Kerry need that political will expressed by states be reflected on technical climate talks Thu, Jul. 21, 2022