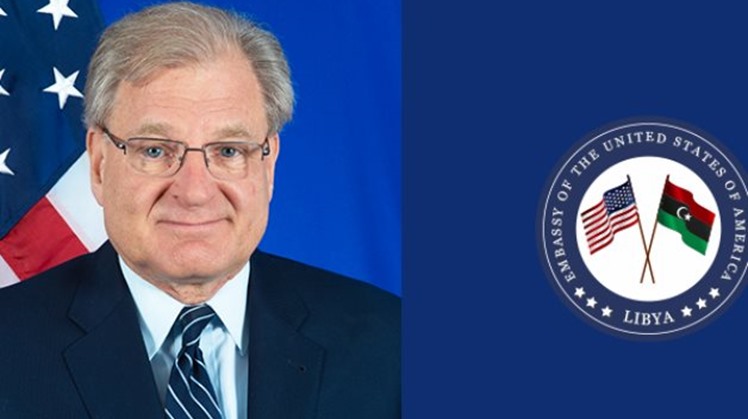 Sun, Oct. 4, 2020
CAIRO – 4 October 2020: U.S. Ambassador to Libya Richard B. Norland hailed Egypt’s efforts to bring the rival military parties in Libya together to meet in the Red Sea city of Hurghada to reach a solution to the Libyan crisis.

In a tweet on Sunday, the ambassador thanked Egypt, adding that during his current visit to Egypt that he and other concerned parties would discuss the ways of supporting an upcoming Libyan Political Dialogue Forum.

Amb. Norland: “I’m continuing consultations with a stop in #Cairo. Here, I’ll express thanks to Egypt for hosting the successful Hurghada talks on security in #Libya; and we will exchange views on how best to support the upcoming Libyan Political Dialogue Forum.” pic.twitter.com/zBeV6oyRmp

It is expected that high-ranking Libyan figures will participate in the inter-Libyan but there is no final date has been set so far, the sources added.

The Libyan parties held talks last week in Hurghada, Egypt. They called for the acceleration of the opening of air and land transportation lines, in a way that guarantees freedom of movement for citizens in all Libyan cities.

The Hurghada talks continued for two days under the auspices of the United Nations and called for speeding up the 5 5 joint military committee meetings, with direct meetings next week.

The talks also called for the immediate release of everyone detained without any conditions or restrictions, as well as stopping the campaigns of media escalation and hate speech and replacing it with the speech of tolerance and reconciliation, rejecting violence and terrorism.

The United Nations Support Mission in Libya expressed its gratitude to the Egyptian government for its efforts in facilitating the convening of this important round of Libyan talks, and appreciated the efforts of members of the two delegations, welcoming the results reached.

The mission expressed its hope that this positive development will contribute to paving the way for the Libyan parties to agree on a final and permanent ceasefire shortly.

Libya is suffering a severe division between two factions; the Libyan Parliament and the Libyan National Army (LNA) led by Field Marshal Khalifa Haftar in the east and the GNA led by Fayez al-Sarraj. The latter is internationally recognized but is not accepted by the Parliament.

Hundreds were killed in continuous battles between the LNA and the forces of the GNA, over the past year.