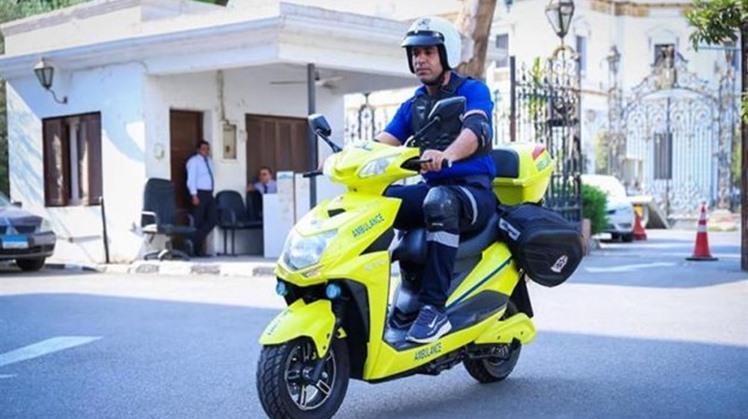 Wed, Aug. 10, 2022
CAIRO – 10 August 2022: The Ministry of Health and Population announced Tuesday the purchase of 12 scooter ambulances in order to better serve patients living in very narrow streets, so as the paramedic would reach them fast, providing first aid, and then, transport them to the vehicle.


The ministry noted in the press statement that the scooters are environment-friendly, as they are electric, and that they can cross a distance of 100 kilometers per charge. Yet, the dates of delivery and entering service have not been announced yet.


In a similar context, the Municipal Authority of 6th of October City announced in July the receipt of four samples of the electric vehicle intended to substitute Toktoks, and that technical inspection would start right away.

Head of the authority Adel al-Nagar told press that a Toktok owner can submit a request to obtain the new vehicle, giving up their old one. Then, the value of the Toktok would be assessed so it would be considered a down payment, while the remaining of the sum would be covered by one the funding institutes having agreements with the authority.

The owner would later pay in monthly installments, which would also be partially subsidized by the authority. The official noted that the new vehicles would have license plates, tracking devices, and pre-order option.

The Industrial Development Authority (IDA) decided in 2019 to ban the licensing of TokTok assembly and manufacturing plants in the country. The plan at the time had been replacing them with vans carrying seven passengers before devising the idea of small electric vehicles.


The then new traffic law set rules regulating TokToks by banning them from using highways and main streets and districts, restricting their operation to slum areas and narrow streets solely.


“TokToks are an unwelcomed phenomenon, as they cause most of the road accidents. By regulating them, we aim at eliminating illiteracy, drug addiction, drugs’ illegal trade and accidents,” Minister of Local Development Mahmoud Shaarawy stated in March 2019.


TokTok has raised controversy in the country since it appeared in 2005, but at present, it seems that a realistic solution is about to materialize.