Egypt will spare no effort to make COP27 a success, Sisi 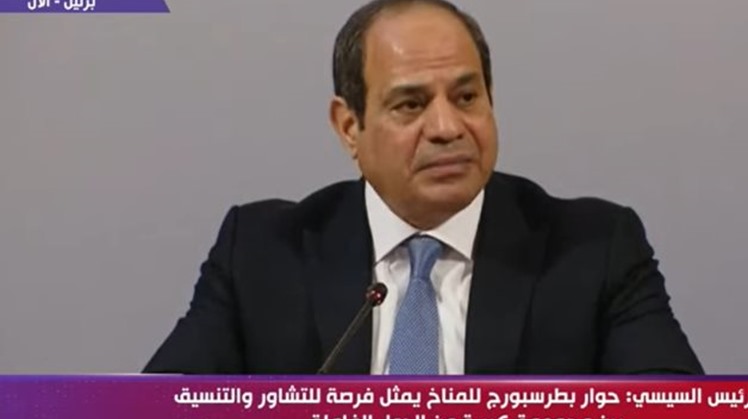 Tue, Jul. 19, 2022
CAIRO – 19 July 2022: Egypt’s President Abdel Fattah al Sisi said that Egypt is hosting the Climate Summit amid delicate circumstances due to the energy and climate crises and the consequences of the war in Ukraine.

He added during his speech at the Petersburg Climate Dialogue that the priority in the coming period is to implement the provisions of Paris climate agreement.

“Petersburg Dialogue has become one of the important stations for coordination and consultation between countries to face consequences of climate change” Sisi said, adding that it's a must to reach a 'clear vision to support developing countries in facing climate change'

“Africa is at the center of challenges and is affected by international crises more than any other region” Sisi said.

The President said that hosting COP27 in Sharm el Sheikh is great indication of Egypt’s interest in climate change.


He added that “climate crisis must be dealt with through ‘determination and exerting efforts’, and that Egypt will spare no effort to make the COP27 a success.

Sisi said that recent climate change reports indicate that exerted efforts are still insufficient, “and that we must save the earth for future generations.” Sisi also noted that the world needs a fair transition to green and renewable energy

“We must think about the losses incurred by developing countries, especially small countries in African countries. It is important that we think about doing more in terms of financing, as richer countries should play a bigger role regarding Climate change” Sisi said.

Delivering a speech during the inauguration of the high-level session of the Petersberg Climate Dialogue in Berlin, President Sisi expressed his sincere appreciation for German Chancellor Olaf Scholz.

He also commended Germany's leading role in addressing climate change and dealing with its impact, saying that Germany's efforts in this respect demonstrated its political commitment at the highest level to support international climate action.

President Sisi, meanwhile, said that Egypt is hosting the 27th session of the Conference of the Parties (COP27) to the United Nations Framework Convention on Climate Change, in a world characterized by successive challenges, primarily the current global energy crisis and the food crisis from which many developing countries are suffering.

This is, in addition to the accumulation of debt, poor flow of funds, the negative impact of the Covid-19 and the complicated political scene, caused by the war in Ukraine, President Sisi went on to say.

"This place a big responsibility on our shoulders to ensure that these difficulties will not affect the implementation of our common vision to address climate change, which was reflected in the Paris Agreement, and confirmed last year in Glasgow," President Sisi further said.

Sisi noted that his speech today focuses on a number of points that Egypt, in its capacity as head of the upcoming UN Climate Summit, viewed as important:

First, all scientific reports and estimates asserted that climate change has become a threat to existence for many countries and communities around the world, Sisi said, adding that it is not now possible to delay the implementation of any pledges and commitments relevant to climate.

All parties involved in the climate issue have agreed that priority in the coming phase is implementing Paris Agreement and turn the specific contributions to practical action within the framework of international principles governing climate topped by justice and joint responsibility, Sisi noted.

Second, in order to achieve such a vision, Egypt seeks the backing of all parties and their contribution to create an atmosphere of confidence that could bring about tangible results for our peoples, Sisi added.

Sisi also praised the latest data released by the G7 summit 2022, held in Germany last month, and highlighted its positive political stances regarding the just transfer of energy to a number of developing countries.

Sisi asserted the need for expanding such support to include other developing countries which are exerting strenuous efforts in this regard, underlining the importance of participation of international foundations and banks to back such steps.

Answering questions by several participants in the high-level session of the 13th Petersburg Climate Dialogue (PCD13) in Berlin Monday, president Sisi asserted this current important phase requires exerting joint efforts to overcome challenges and build on and develop pledges and outcome of COP26, held in Glasgow.

President Sisi said it is necessary to address climate change issue through determination and joint efforts.

He thanked Germany for hosting PCD13 and said the event stressed the country's commitment to supporting COP27.