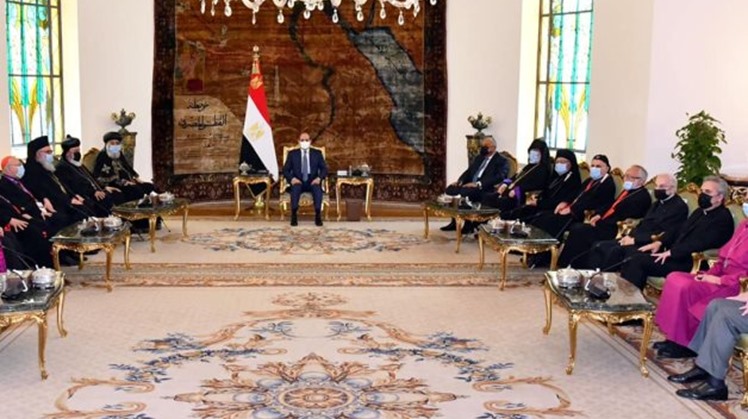 Thu, May. 19, 2022
CAIRO – 17 May 2022: President of the Evangelical Community in Egypt Andrea Zaki hailed President Abdel Fattah El Sisi's meeting with heads and leaders of Arab churches participating in the General Assembly of the Middle East Council of Churches in its 12th session, held for the first time in Egypt.

The president's meeting demonstrates Egypt's commitment to showing respect and recognition to all, Zaki said in a press release on Tuesday.

"We have a patriotic Egyptian leadership that leaves no stone unturned to consolidate the principle of citizenship," Zaki added.

Pope Tawadros II, the pope of Alexandria and head of the Coptic Orthodox Church, and Foreign Minister Sameh Shoukry attended the meeting.

President Abdel Fattah al-Sisi told heads of churches across the Middle East on Tuesday that Egypt has a strategy of eliminating discrimination based on anything while spreading a culture of diversity and freedom of belief.

The president told attendees that Egypt’s strategy also combats fanaticism and extremism “without being tied to a specific time frame,” but the concepts are being applied in all aspects of life in Egypt.

Citizenship and equal rights are constants for the Egyptian state, Sisi said, adding that many antiquities and old churches in Egypt, which includes many historic manuscripts and icons, have been renovated. He also mentioned the project reviving the Holy Family’s trajectory in Egypt as part of attention paid to the Christian heritage of Egypt, according to a statement by the Egyptian presdiential spokesperson.

Pope Tawadros II of Egypt also attended the meeting, which tackled cooperation between Egypt and the General assembly of Middle Eastern Churches in terms of dialogue, citizenship, and combating extremism in all countries of the region.

The heads of churches also expressed appreciation for Egypt’s role in the Middle East in settling complicated problems that cause serious humanitarian suffering. They also supported Egypt’s efforts towards development and construction in Egypt and the Middle East.