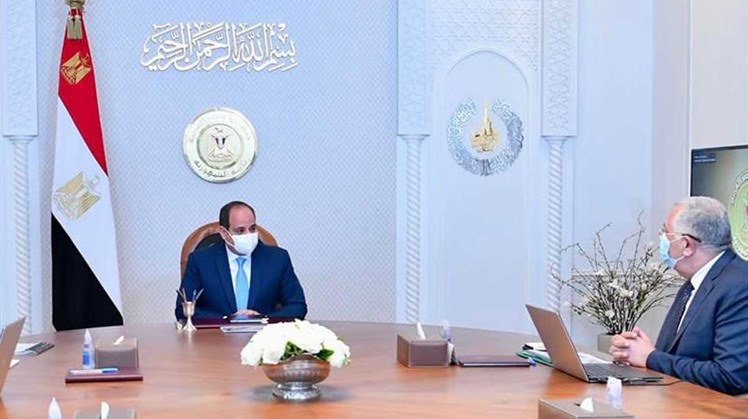 CAIRO, 17 May 2022: Egypt's President Abdel-Fattah El-Sisi has urged to maximize effort to enhance productivity in the agricultural sector and enhance food security when it comes to strategic crops.

The president made the remarks in a meeting on Monday with Prime Minister Mostafa Madbouly, Minister of Agriculture and Land Reclamation El-Sayed El-Quseir and Minister of Trade and Industry Nevine Gamea.

The meeting sought to follow up on the agricultural export system, presidential spokesman Bassam Rady said in a statement.

Efforts in this regard should also link agricultural production with relevant industries and create direct and indirect job opportunities in many areas, the president added.

The meeting reviewed the status of Egyptian agricultural exports, which includes 350 agricultural products that are exported to more than 150 countries around the world, at the top of which are Arab and European countries, the statement said.

In 2021, Egypt’s agricultural exports witnessed an unprecedented leap at 5.6 million tons with a value of $3 billion, the spokesman said. This allowed Egypt to become the largest citrus exporter worldwide.

Minister El-Quseir addressed the Senate on Sunday, where he noted that Egypt's agriculture sector has contributed to 15 percent of GDP and is responsible for employing 25 percent of the country’s labour force.

El-Quseir told the Senate that the government took the initiative of preparing an adequate stock of strategic crops amid the negative economic impacts of the Russia-Ukraine crisis. This includes building 73 silos that can accommodate 5.5 million tons of strategic commodities.

The president also followed up on updates regarding the current wheat season, which started in April, in light of the measures that the state has taken to enhance wheat production.

These include increasing areas cultivated with wheat by around 250,000 feddans in conjunction with the national silos project that boost the state’s strategic storage capacity, El-Sisi said.

This is in addition to increasing the price of local wheat procurement and allocating exceptional incentives for farmers on wheat delivery.

Over the past decade, the state has launched national projects to increase wheat production and achieve self-sufficiency in the strategic crop, with bread being a staple for every Egyptian table.

Under the project to establish new wheat silos, the state has increased the wheat storage capacity to 3.4 million tons from 1.2 million tons in 2014, Minister of Supply and Internal Trade Ali El-Moselhi said last month.

Moselhi noted that the government also seeks to increase the strategic wheat storage capacity by building 60 field silos in the coming period with a total capacity of 600,000 tons.

The minister’s remarks came in an event to signal the beginning of the wheat harvest season in the Toshka agricultural lands in Upper Egypt's Aswan, a project through which Egypt seeks to achieve self-sufficiency in wheat.

In April, the government said it allocated EGP 1.1 billion for the General Authority for Supply Commodities and the Agricultural Bank of Egypt in order to finance local wheat crop procurement from farmers.

This comes as Egypt seeks to encourage farmers to deliver the largest possible amounts of local wheat to the government amid disruption in wheat supply worldwide due to the war in Ukraine.

In a press conference to explain the country’s plan to cope with the economic impacts of the global crisis, Prime Minister Mostafa Madbouly said Egypt seeks to collect 5.5 million tons of local wheat from farmers this year.

Madbouly added that the country is expected to unprecedentedly produce 10 million tons of local wheat this year thanks to projects to increase wheat cultivated areas.

Egypt has also worked on diversifying wheat import sources including from countries outside Europe, as 80 percent of the country’s imports were coming from Russia and Ukraine.

The government also moved to diversify the wheat import markets to currently reach 22 markets, the last of which was that of India, in order not to be limited to Russia and Ukraine, El-Quseir told the Senate on Sunday.

Since the start of the war, Egypt has affirmed on various occasions the availability of strategic crops, including wheat, rice and sugar, as well as other basic commodities for months to come despite the global economic crisis.