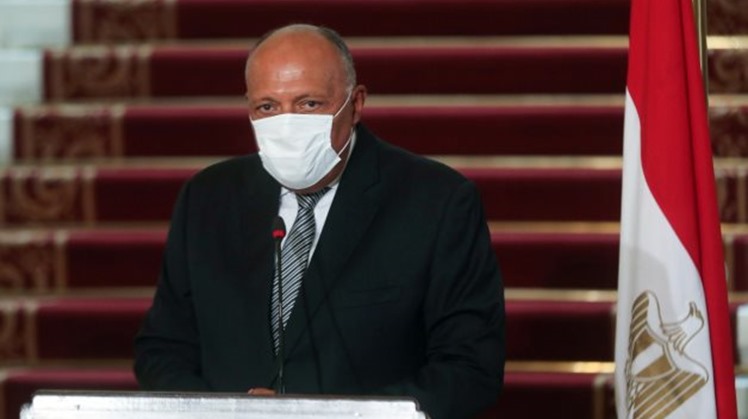 As they met on the sidelines of the Berlin 2 Conference in Germany, Shoukry and Hecker discussed the developments of the GERD issue, including the Egyptian efforts to reach the binding deal to address the difficulties facing this issue, the Egyptian Foreign Ministry said in a statement.

Shoukry and Hecker also discussed the Palestinian cause and the need to work on achieving a fair and permanent solution to Palestinian-Israeli conflict.

They also discussed the situation in the Gaza Strip and Egypt’s keenness to implement the reconstruction of the enclave and maintain the ongoing ceasefire, the statement read.

Egypt brokered a ceasefire in May between the Palestinian factions in Gaza and the Israelis, which stopped Israeli hostilities against the Gaza Strip.

These hostilities caused the death of 254 Palestinians and destroyed dozens of homes.

Shoukry and Hecker discussed the developments of the Libyan issue, especially the national elections scheduled for December and the need for the exit of all foreign troops and mercenaries from Libya without delay.

They also discussed the Egyptian-German relations in light of Egypt’s participation in a number of big projects in Egypt.

Ahead of the conference, Shoukry affirmed in press remarks Egypt’s unwavering stance supporting the aspiration of Libyans and the necessity to hold the elections on time as scheduled.

Shoukry reiterated support to efforts aiming at launching a comprehensive political process to end the conflict in Libya and ensure the exist of foreign troops.

Shoukry arrived in Berlin on Tuesday to attend the Berlin 2 Conference on Libya at an invitation from the German foreign minister and the United Nations secretary-general.

During the conference, Shoukry will confirm Egypt's firm stand on the importance of protecting Libya's sovereignty and independence.

He will also stress support for efforts to push forward the comprehensive political process by Libya's leadership to end the schism, withdrawal of mercenaries, and disarmament of armed groups.

He will call for mobilizing efforts to hold the Libyan general elections on a due date slated for December 24, 2021.

United Nations Spokesman Stephane Dujarric on Tuesday said that the Berlin conference will discuss difficulties impeding the implementation of the political roadmap in Libya.

He added that it will also discuss holding the elections in the North African country, according to the UN Media Center.

The conference will be attended by the foreign ministers of countries concerned with the Libyan file and representatives for the Libyan interim government along with the UN undersecretary, he pointed out.

The conference is aimed at assessing the progress achieved on the political, economic and security tracks in Libya, he added.