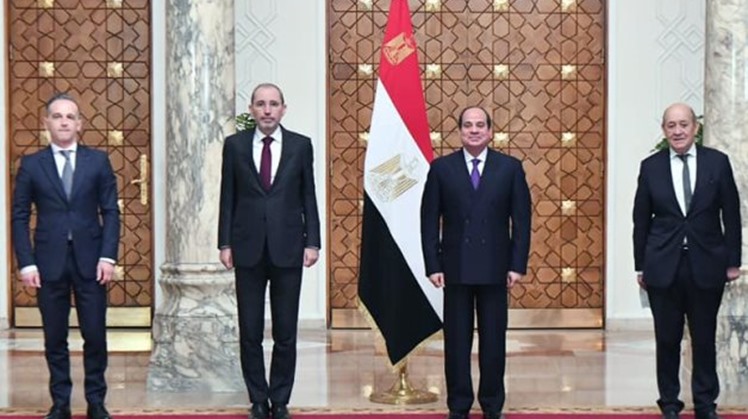 “The president affirmed that settling the Palestinian issue will change the situation and condition of the entire region for the better,” a statement by presidential spokesman Bassam Radi read.

This change for the better can be achieved through opening new paths and horizons of regional cooperation among governments and peoples, the statement cited Sisi as saying.

The president also stressed Egypt’s ongoing efforts toward the Palestinian cause, as one of the constants of the Egyptian policy and the core of issues of the Middle East, the statement read.

Sisi affirmed that these efforts aim to help the Palestinian people restore their legitimate rights and establish their independent state in accordance with the international legitimacy references.

Foreign ministers of Jordan, France and Germany all expressed appreciation to Egypt’s efforts in backing the Palestinian cause.

They hailed Egypt’s historic, fixed and continuous role in this regard, with the aim of reaching a just and comprehensive solution to the crisis.

The ministers also praised efforts made by the Egyptian state to maintain de-escalation in the Gaza Strip and improve the humanitarian and economic situation at the strip.

They hailed Egypt’s keenness to accomplish the reconciliation between the Palestinian factions, affirming the need to periodically hold the “Munich Group” to activate peace efforts in the region and resolve the current stalemate in the Palestinian issue.

The meetings aim at urging the Palestinian and Israeli sides to negotiate to reach a comprehensive, fair political solution to the crisis.