Egypt's FM, irrigation min. to participate in new negotiations round on Ethiopian Dam 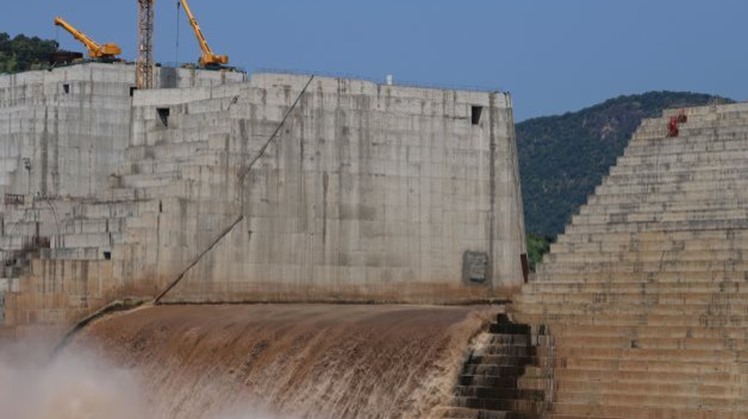 Sun, Jan. 3, 2021
CAIRO – 3 January 2020: Egypt's Foreign Minister Sameh Shokry and Minister of Irrigation and Water Resources Mohamed Abdel Aty will participate in the new negotiations round on the Grand Ethiopian Renaissance Dam (GERD) taking place in the evening of Sunday.


The meeting is chaired by South African Minister of International Cooperation given that South Africa is currently the chair of the African Union (AU) mediating the negotiations.


As for the content of the meeting, it will focus on Sudan's proposal aimed at making the negotiations more effective by enlarging the role of the AU through its experts. The goal is reaching a legal binding agreement. It is noted that the AU experts have already drafted one that should be satisfactory to the three states.


The AU called Egypt, Ethiopia and Sudan for a meeting on January 3 to discuss the issue of the Grand Ethiopian Renaissance Dam (GERD).


The meeting is the first after talks have been suspended for a month, and is taking place as South Africa is concluding its chairmanship of the union.


President Sisi re-affirmed the fundamentals of the Egyptian stance mandating the crystallization of a legal binding agreement among Ethiopia, Sudan, and Egypt on the rules of dam operation and reservoir filling.


The president stressed that the Nile Water is an existential problem for Egypt and its people expressing appreciation for the efforts deployed by President Ramaphosa.


On his side, the AU chair praised Egypt's endeavors to reach solutions to the disagreement asserting that continuous coordination among both countries over the next period to conclude a fair and balanced agreement.


The call also covered aspects of bilateral cooperation, and ways to serve fellow African states on both the AU level and the international level.


After withdrawing from the tripartite negotiations on the Grand Ethiopian Renaissance Dam (GERD) in November, Sudan declared agreeing with Ethiopia on resuming talks and activating the High Joint Committee on Border Issues.


That was after a visit paid by Sudanese Prime Minister Abdallah Hamdok – accompanied with Foreign Minister Omar Kamar El Din and chief of the General Intelligence Agency - to Addis Ababa on Sunday. The visit was planned to last for two days but Hamdok returned to Khartoum after a few hours without any clarification on the reasons.


The dispute among Egypt, Sudan, and Ethiopia dates back to May 2011 when Ethiopia started building the dam; Egypt voiced concern over its water share [55.5 billion cubic meters].


Three years later, a series of tripartite talks between the two countries along with Sudan began to reach an agreement, while Ethiopia continued the dam construction.


In 2015, the three countries signed the Declaration of Principles, per which the downstream countries should not be negatively affected by the construction of the dam.


In October 2019, Egypt blamed Addis Ababa for hindering a final agreement concerning a technical problem, calling for activating Article No. 10 of the Declaration of Principles, which stipulates that if the three countries could not find a solution to these disputes, they have to ask for mediation.


Washington had brokered tripartite negotiations among the three countries, in the presence of the President of the World Bank (WB) starting from November 6, 2019 until February 27 and 28, 2020.


During these rounds of talks, tangible outcomes were agreed on among the three parties concerning the rules and mechanism of operating the dam and the filling process of the reservoir during the drought and prolonged drought; however, an agreement was not sealed.


Constructions in the Grand Renaissance Dam started on April 2, 2011 at a cost of $4.8 billion. It was built by the Italian construction and engineering company Salini Impergilo. The Italian company is headquartered in Milan. The dam is located on the Blue Nile with a capacity of 74 billion cubic meters, and is expected to generate up to 6,000 megawatts of power.