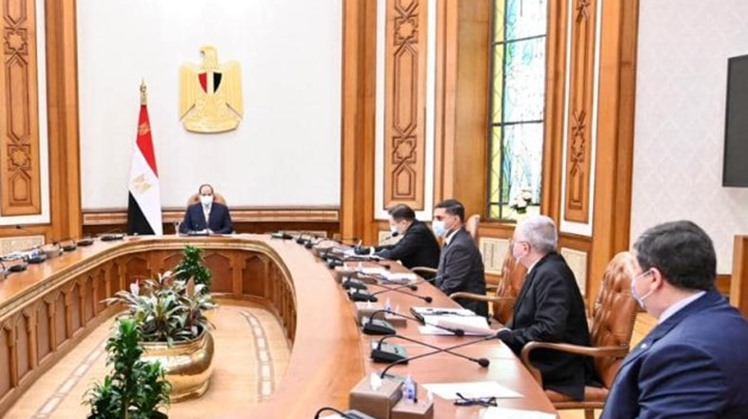 The Dabaa nuclear power plant is developed by Rosatom and will be owned and operated by Egypt’s Nuclear Power Plant Authority (NPPA).

During the meeting, Sisi said Egypt aspires to the completion of the plant as a new edifice to the accomplishments achieved as a result of Egyptian-Russian cooperation across history.

Sisi affirmed Egypt’s appreciation of the relations between the two countries as a symbol of Egyptian-Russian friendship.

He also voiced confidence in the Russian deep-rooted experience that would surely be reflected o the establishment of the nuclear plant in Egypt, in accordance with the highest standards of technological and technical efficiency and nuclear safety.

The meeting was attended by Minister of Electricity Mohamed Shaker; Amgad Al-Wakeel, head of the NPPA; Vice President of Rosatom Gregory Sosnin and the Russian ambassador to Cairo.

Sisi asked officials to convey his greetings and congratulations to President Vladimir Putin and the Russian people on Christmas.

In 2014, Egypt and Russia announced their cooperation in the nuclear power field. On November 19, 2015, an agreement was finally signed between Cairo and Moscow that allows Russia to build a nuclear power plant in the Mediterranean city of Dabaa, with Russia extending a $25 billion loan to Egypt to cover the cost of construction. The loan will cover 85 percent of the plant, with Egypt funding the remaining 15 percent.

According to the deal, Rosatom finances and constructs four third-generation reactors, with a capacity of 1,200 megawatts (MW) each, for a total of 4,800 MW. The plant will be built on approximately 12,000 feddans and is expected to create over 50,000 job opportunities.

Nuclear energy is part of the government’s plan to diversify its energy sources to prevent any future crisis resulting from shortages in electricity.