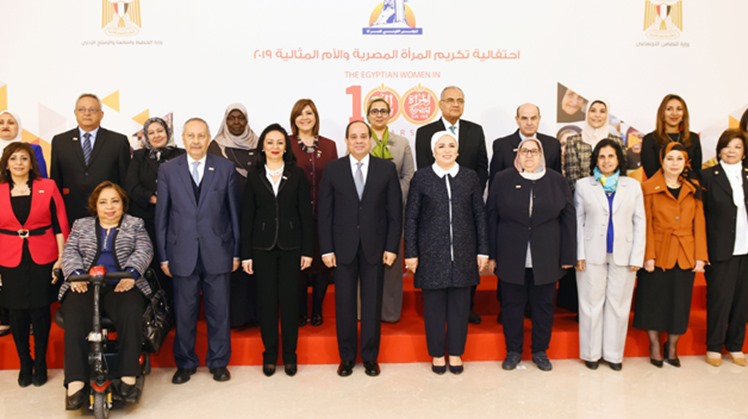 Mon, Apr. 15, 2019
The journey of Egyptian women to freedom extends across history and epitomized in 1919 when women took a stance to seek their rights. Women unions were founded for the first time in Egypt in 1927 demanding further political rights for women. In March 2019, the political leadership in Egypt, headed by President Sisi honored Egyptian women for their strong role in helping the national strategy to succeed by providing it with powerful political support, making the economy thrive and fighting terrorism. The speech of H.E. the President during the Celebration of Egyptian Women in 100 Years and in honor of the Model Mother on March 30, 2019 praised this role eloquently.

Among the many acquired achievements in favor of women, came the announcement of the Year of Women in 2017, and the reshuffling of the National Council for Women to ensure a fair promotion of younger leadership and a fairer representation of rural women and women with special needs. Furthermore, several attainments are setting new records:

• The first Egyptian, Arab and African woman assigned as the National Security Advisor for the President of the Republic.

• Women appointed as Governors is a precedent in Egyptian history.

• The first woman as the Deputy Governor of the Central Bank of Egypt.

• The Higher Justice Council announced the appointment of a woman Deputy Minister of Justice for the very first time.

• Eight women Ministers are currently appointed in the Cabinet to form a high 25% of the government leaders for the first time and holding important non traditional portfolios.

• Women parliamentarians – in the 2015 Parliament – have reached an unprecedented number of 90 MPs, an approximate of 15%.

• Female voters have reached the threshold of 55% of total voters.

• Working women have crossed the 51% threshold as representatives in local councils.

• Women are at a majority of 54% in administrative jobs, 45% in specialized posts, 48% in technical posts, and 19% in handicraft and auxiliary jobs.

• H.E. the President has also launched an initiative of ‘Takaful’ and ‘Karama’ to support needy families – an initiative praised by the World Bank as among the four best programs to support the poor at the world level.

• In the field of education, female college students have crossed the 57% mark (compared to 48% four years ago)

This year, on March 31, President Abdel Fatah al-Sisi announced seven decisions on women empowerment in his speech delivered in the Egyptian Women Day ceremony whereas he had also honored a number of women and ideal mothers.

The decisions the government must meet are:

The first is to study ways to achieve greater participation of women in the labor market;
provide an appropriate and supportive environment, and appropriate social protection for women; encourage women working in the informal sector to shift to the formal sector and to enter nontraditional sectors in which their ambitions are fulfilled.

The second is to draft an appropriate legislation aimed at protecting women effectively from all forms of psychological and physical violence taking into consideration that early marriage before the legal age, and denying women and their children an appropriate amount of money in case of divorce are forms of violence.

The third is to conduct a deeper and more comprehensive study of the phenomenon of women in debt, and draft legislations and policies that would reduce this phenomenon because of its implications on the Egyptian family.

The fourth is to study the promulgation of a new personal status law and effectively implement “Mawada” program.

“In the light of the previous instructions to draft a family awareness program to prepare youth for the responsibilities of marriage, I look forward to the effective and positive implementation of “Mawada” program, which will bring about the stability of the family and preserve the rights of both spouses; along with studying the issuance of a new personal status law,” the president said.

The fifth is to to take the necessary measures to achieve financial inclusion, technological empowerment of women and provide more support for small projects that offer work opportunities to women.

The sixth is to promote further political participation and greater engagement by women in various sectors.

“In light of our pride of the representation and role of women in parliament and cabinet, which is the highest in the history of Egypt, I call for greater political participation and greater engagement in various sectors. Egypt is in the process of building its renaissance, and it is in need of the efforts of its daughters, side by side with its sons,” the president said.

The seventh is to study the amendment of the Public Service Law to become a tool for training and qualifying Egyptian young women to join the labor market, besides developing the necessary mechanisms and incentives to achieve this.

MP Hiyam Halawa confirmed that the approval by the Legislative Committee of the House of Representatives of the proposed constitutional amendments that at least one fourth of the seats shall be allocated to women is a testimony to the history that the Egyptian women obtained their rights and granted all forms of empowerment in all fields during the reign of President Abdel Fattah Al Sisi.

FEMALA MINISTERS PRESENT 25% OF THE CABINET

For the first time in Egyptian history, this year we have 8 female ministers in the Cabinets, which makes 25% of the Cabinet. The ministers are Hala Zayed Ministers of Health, Yasmine Fouad Minister of Enviroment, Inas Abdel-Dayem Minister of Culture, Rania Al-Mashat Minister of Tourism, Ghada Wali Minister of Social Solidarity, Nabila Makram Minister of immigration, Hala El Saeed Minister of Planning Monitoring and Administrative Reform, Sahar Nasr Minister of Investment and International Cooperation.

RESULTS OF A STUDY ON WOMEN IN PARLIAMENT WORLDWIDE

Egypt is number 31 at the level of African countries. If the percentage of women in the Egyptian parliament reaches 25%, if the other countries do not move, Egypt will jump to No. 15.

Egypt No. 12 at the level of Arab countries. If the percentage of women in the Egyptian parliament reaches 25%, if the rest of the countries do not move.

Egypt ranks 122th out of 149 countries in the EMP, and if the proportion of women in the Egyptian parliament reaches 25%, the centre of Egypt will jump to 91 (31 points ahead).