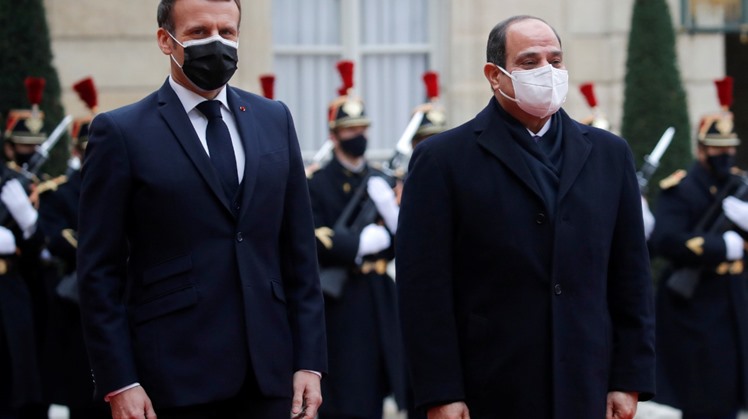 Sisi, during a press conference after the meeting, said he discussed with Macron the necessity of spreading the values of tolerance, moderation and coexistence among religions, civilizations and peoples.

They also agreed on the need to fight extremism and terrorism as well as hatred of others and racism, thus contributing to promoting dialogue between people of different religions and cultures.


The full statement of El-Sisi, according to the Presidency, comes as follows:

In the Name of Allah, the Most Gracious, the Most Merciful,

I extend to your Excellency my sincere thanks for graciously inviting me to pay a state visit to your friendly country. I would also like to express my appreciation for the warm welcome and generous hospitality shown to us from the moment we arrived in Paris, which confirms the strategic and friendly relations, extending at all levels, between our two countries.

Additionally, a strong political will is manifested with the aim of advancing relations since giant leaps forward have been taken in our bilateral cooperation during the past years in all fields: political, military, economic and cultural. Regular and periodic consultation and coordination are carried out on various issues of mutual interest regionally and internationally.

Today's talks with my friend President Macron were colored by frankness, candor and transparency, which reflected a convergence of views between us on many bilateral and regional files and issues.

In this context, we had a detailed discussion on all areas of bilateral cooperation, particularly economic, trade and investment, and ways to develop them to live up to the distinguished political relations between our two countries, which have been gaining momentum over the recent years.

In this context, we agreed on the importance of stepping up joint action to increase the value of French investments in Egypt and taking advantage of the great opportunities currently provided by the mega national projects in Egypt. We also affirmed the need to boost and have a balanced trade exchange by providing more opportunities for Egyptian exports to access the French market. Additionally, we underlined the importance of strengthening cooperation in high-priority economic sectors, particularly in the fields of pre-university education, higher education, communications, artificial intelligence applications, cybersecurity, digital transformation, transportation, health, and infrastructure.

We have also tackled aspects of military cooperation and means of strengthening cultural and scientific relations in a way that reflects the great cultural and civilizational heritage of our two countries.

We have also highlighted the significance of increasing the flow of French visitors to tourist destinations in Hurghada, Sharm El-Sheikh, Luxor and Aswan, in light of the strict precautionary measures applied by Egypt to that end. As a result, rates of coronavirus infection there declined to near zero.

I also commended the decision taken by His Excellency the President of the French Republic to resume tourist trips between the two countries as of October 4, 2020.

In this context, we exchanged views on health, social and economic repercussions of the spread of the novel coronavirus, and on my part, I showcased the tireless efforts made to deal with this crisis.

These efforts were remarkably successful in achieving a delicate balance between applying precautionary measures to contain the spread of the virus on one hand, and pursuing economic activity and activating the social protection system to address the pandemics negative effects on the other hand.

Hence, Egypt has been one of the few countries that were able to achieve positive economic growth rates worldwide.

These talks were an important opportunity to affirm the necessity of taking joint action to encourage spreading the values of tolerance, moderation and coexistence among religions, civilizations and peoples and fighting extremism and terrorism as well as hatred of others and racism, thus contributing to promoting dialogue between people of different religions and cultures.

I also stressed the importance of not associating terrorism with any religion and not offending sacred symbols and beliefs. I also stressed the need to fully distinguish between Islam, as a great divine religion, and the practices of some extremist elements, who claim that they belong to Islam and seek to use it to justify their terrorist crimes.

In this context, we also discussed our ongoing efforts to formulate an international collective mechanism to counter hate speech and extremism with the participation of religious institutions on all sides with the aim of spreading the values of humanitarian peace and consolidating the foundations of tolerance and peaceful coexistence among all peoples.

Our talks included an in-depth dialogue on the issues of human rights, racism and Islamophobia in light of the escalating challenges, turmoil and armed conflicts in the European continent and the Middle East region, thus making us shoulder a great responsibility to achieve a balance between maintaining security and internal stability, on the one hand, and preserving human rights principles in their comprehensive sense, on the other hand.

In this regard, I presented the Egyptian efforts aimed to further promote human rights for all citizens without discrimination by consolidating the concept of citizenship, renewing religious discourse and applying the rule of law to everyone without exception.

These efforts also aim to modernize the legislative structure, especially the approval of the executive regulations for the law regulating the practice of civil work to facilitate the work of civil society organizations, enhance their organizational and financial capabilities, and launch the first comprehensive national strategy for human rights that is being prepared with the participation of civil society groups.

On the other hand, our lengthy discussions focused on the regional situations in the Eastern Mediterranean, the Middle East, and the Sahel region since they represent many challenges and escalating risks that threaten the national security of our two countries and our mutual interests.

We agreed that it is important to have the international community confronting aggressive and provocative policies which are pursued by regional powers that do no respect the principles of the international law and good neighborliness, supports terrorist organizations and seek to fuel conflicts in the region.

In a related context, we affirmed the necessity of continuing active endeavors to settle regional disputes peacefully based on resolutions of international legitimacy. We also agreed on the importance of creating the appropriate environment for the resumption of the peace process between the Palestinian and Israeli sides in accordance with the agreed terms of reference and the principle of the two-state solution which would lead to the establishment of a Palestinian state on the borders of June 4, 1967 with East Jerusalem as its capital.

We stressed that the comprehensive political solution in Libya which addresses all aspects of the crisis is the only way to achieve stability for this brotherly country and to preserve its territorial integrity.

We stressed the importance of dismantling armed militias and having all foreign forces out of Libya, thus what was agreed upon during the meetings of the 5+5 Joint Military Commission would be implemented.

The latest developments in negotiations of the Renaissance Dam and the Egyptian efforts aimed at reaching a binding and balanced legal agreement for the filling and operation of the dam, which takes into account the interests of Egypt, Sudan and Ethiopia.

Your Excellency Emmanuel Macron,
In conclusion, I once again would like to express my gratitude for your kind invitation and appreciation for our constructive discussions which confirmed our mutual keenness to further develop fruitful cooperation between our two countries so as to achieve our mutual interests. I look forward to receiving you in Cairo during the next year as a generous guest of Egypt.