Sisi salutes the Egyptians for not responding to 'destructive calls,' promises petroleum self-sufficiency 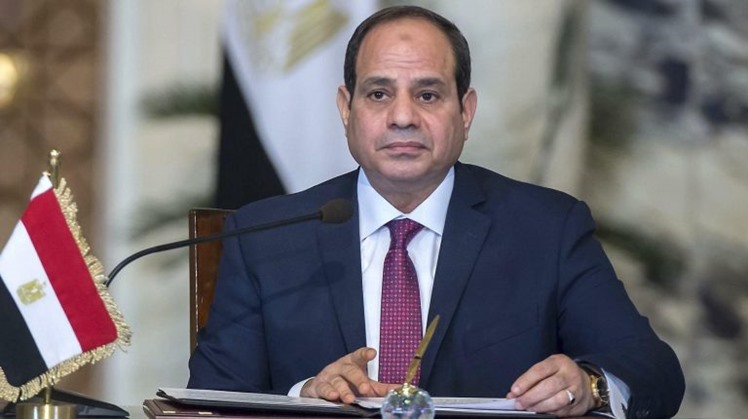 Mon, Sep. 28, 2020
President Abdel Fatah al-Sisi has thanked the Egyptian people for not responding to recent "destructive calls" for demonstrations, saying the state will always choose to reform rather than leave people in difficult conditions.

During the Sunday inauguration of a project in Qalyubia, the Delta, the president said that such calls are made during difficult circumstances amid reform, setting the example of developing the road infrastructure of eastern Cairo, which suffered congested traffic for months due to building several bridges.

Sisi explained that two to three million cars move in the area of Heliopolis and Nasr city of eastern Cairo on daily basis, and these bridges are erected to help people with saving time and fuel.

The Muslim Brotherhood channels broadcast from abroad ferociously tried over the past week to mobilize people in Egypt to demonstrate on Friday, claiming that the state's endevors are against the people and are at their expense. Sisi emphasized that the "state is the people," and so no one can drive a wedge between them. The price of development is paid by the entire Egyptian people, including the state, he said.

The bet, however, has always been on the Egyptian people and their understanding and appreciation of the efforts being exerted to ultimately reach better conditions, Sisi continued. Admittedly, the president also said people "put up with" the difficulties to reach that end.

That bet is always winning, Sisi said, because the state develops the country rather than destroy it, unlike other forces that have destoryed several countries in the region.

No state can be established on destruction even if it is on supposedly religious basis, if a child grows up in a refugee camp, he would later work in Libya and Egypt, which means to destroy them. In Egypt, the media and education are the real basis in creating an understanding of the world inside our children.

He cited UN figures saying that $440B are required to reconstruct a neighboring country to restore it to how it was 10 years ago, noting that the only "change" was regression because that figure is not and will not be available.

"We will never let Egypt go down that path, because this is destruction, not change," Sisi said.

On Sunday, Sisi inaugurated a A $3.4M-hydrocracking complex with a yearly production of 4.7M tons of high-value petroleum products in Musturud city of Qalyubia, the Delta. Sisi says the Musturud projects must be reflected on economic and social conditions in the city, promising to allocate L.E1B a year for five years to develop Musturud. He called on the private sector in Musturud to take on social corporate responsibility, thanking and supporting privately-owned companies for their work in the project.

The development of the petroleum sector in Egypt has cost L.E.1.2B, and more projects will be inaugurated in the coming months in Asyut, Upper Egypt to achieve self-sufficiency in terms of petroleum, Sisi said.

Egypt: the OPEC of natural gas

Going over other points spoken of in the media, Sisi said millions have ben allocated to build new cities on the outskirts of governorates to avoid unplanned urban expansion on fertile lands.

He praised the low numbers of Covid-19 contractions in Egypt but called on Egyptians to continue with precautionary measures to avoid a second wave, which has already occured in countries much more advanced than Egypt. He said the state deals with the issue in full transparency because there is no room for slackness when it comes to a pandemic.

The Musturud complex was established in cooperation with the private sector to produce high-octane gasoline and diesel with Euro 5 quality specifications, butane, jet fuel, naphtha, coal and other petroleum derivatives.