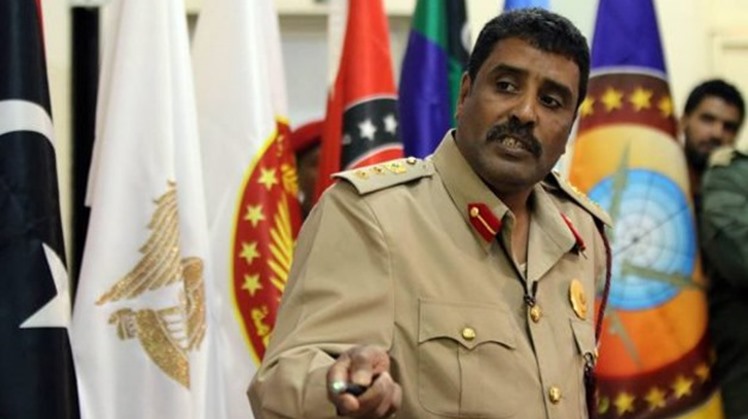 Tue, Aug. 11, 2020
CAIRO – 11 August 2020: Major General Ahmed Al-Mismari, the spokesperson for the Libyan National Army (LNA), confirmed that cautious calm now prevails over the region in all the fighting axes in Libya, awaiting the developments and results of the Cairo declaration.

During attending a ceremony in Egypt to celebrate the 80th anniversary for the formation of the Libyan army, Mismari pointed out that the Cairo Declaration is based on a realistic vision to solve the Libyan crisis and sincere intentions to find a solution.

He said that his initiative restores confidence among the Libyan people that the enemy hit.

Mismari emphasized the negotiations are based on the initiative of Cairo and Berlin, "And we, as soldiers, have stoppedand await orders," he said.

The spokesperson said that the Turks are still escalating the situation in Libya towards a crisisand transferring thousands of mercenaries, as they do not want a ceasefire, but theyare trying to gain moretime under the cover of negotiations. He noted that Turkey had taken control of a number of cities and turned them into military bases.

Mismari also stressed that the red lines west of Sirte and Al-Jufra are protected, and LNA is ready to implement orders after the restructuring of the military arrangements.He pointedout that the current military position in Libya respects the Egyptian initiative to cease fire.

Regarding the attack, he said, "We have carried out operations of defense, and this is a legitimate right."

"We do not want a solution in which a Turkish or terrorist party. Turkey must leave the Libyan scene, militarily and politically.The militias should be demobilized,takfiris should be fought and Syrian and Somali mercenaries should leave," Mismari added.

LNA's spokesperson stressedthat Egypt had been atrue support for the Libyan people from the time of the Turkish occupation until now and has been bearing the burden of the Libyan crisis due to the borders, neighborhood and common destiny.

In July, the Egyptian House of Representatives has authorized President Abdel Fatah el-Sisi to “take necessary measures” to protect national security, giving a green light for the president to send troops to Libya.

A week earlier, Sisi said at a meeting with Libyan tribal chiefs in Egypt that any Egyptian military intervention in Libya may only materialize upon a request by the Libyan people and a permission from the Egyptian House.

According to Article 152 of the Egyptian constitution, the state has to seek the Parliament’s approval before declaring war or sending its forces in combat missions.The members attending the session are not authorized to disclose any details of the discussion inside this secret meeting.

During his meeting with the tribal chiefs on July 16, Sisi said Egypt has always stood by a peaceful solution in Libya through encouraging negotiations between Libyan factions. However, it will not stand idly as it watches actionsthat threaten Egypt’s national security.

“Egypt has the strongest Army in the region and Africa,” he said, adding that the armyis, however, wise and does not assail or invade other territories.

He noted that in case the Egyptian forces entered Libya, they will be led by tribal leaders carrying the Libyan flag. Sisi promised that Egypt will intervene "only at the Libyans' request and withdraw upon their order."