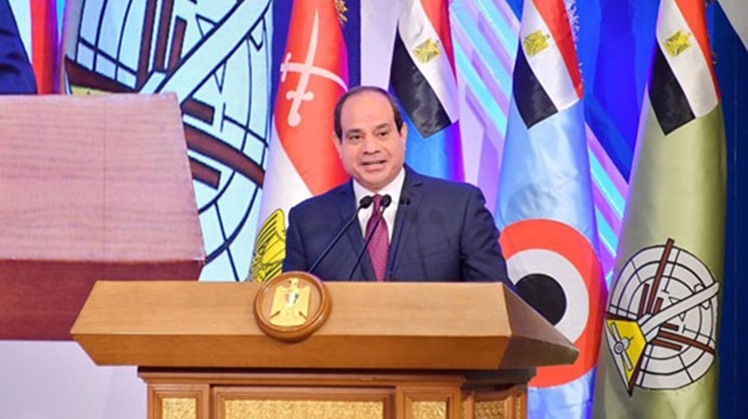 Sat, Jun. 20, 2020
CAIRO – 20 June 2020: Egypt's President Abdel Fatah al-Sisi checked on the forces in the Western Military Zone Saturday telling them, "The Egyptian Army is one of the strongest in the region. Yet, it is a wise army that protects but doesn't threaten, and is able to defend the national security of Egypt within and beyond its borders."

The president said that the Air Force, the Special Forces, and the Border Guards have been securing 1,200 kilometers of borders with Libya for seven years, and accomplishing missions that have not been disclosed.

"I'm so happy to meet you today. I got assured about the high status of your combat and technical competence. I see the Air Force and Special Forces are ready to accomplish missions," the president told forces.

The president warned in his speech in Sidi Barani district in Matrouh Governorate bordering Libya against the foreign intervention in Libya for it composes a threat to regional, European, and global security and stability.

The president asserted the withdrawal of mercenaries from Libya, and the necessity that militias give up their arms to the Libyan National Army (LNA).

The president underlined the outcomes of Germany Conference held in January stating that all foreign powers shall refrain from supplying arms to Libyan armed groups.

"If Egypt had illegitimate goals in Libya, we would have intervened years ago. We would not accept that history documents that we intervened in time of Libya's weakness…Jufrah and Sirte are a red line…The current line must be maintained. The party who would not respect it, would attain neither the west nor the east. The political process must go forward," the president tells a representative of Libyan tribes.

The president's visit took place 10 days after the meeting of the chief of staff with the elements of the same zone where he affirmed the capabilities of the Egyptian Armed Forces in the face of threats.

Farid added that the Egyptian Army is able to secure the borders in all strategic directions while aiding state institutions fight coronavirus.

Earlier this week, 23 Egyptian expats in Libya were abducted and tortured by Al Hazm militia from Tarhouna and held in Misrata. They were later freed after diplomatic efforts by Egypt, and repatriated to their homeland on June 18.

In December 2019, the Tripoli-based Government of National Accord (GNA) and Turkey signed two MoUs on defense and gas drilling eastern the Mediterranean. Turkey sent 1,500 officers and military experts to Libya to co-command the operations rooms of the GNA militias, and has been transporting arms by sea as well.

The Syrian Observatory for Human Rights (SOHR) had reported that Turkey transported 15,000 Syrian mercenaries into Libya, including 300 minors aged between 14-18, and that the majority of them belong to Sultan Murad armed group. In addition, 1,800 mercenaries arrived to training camps in Turkey before they move to the North African state.

In January, the Libyan National Army (LNA) recovered Sirte from the militias protecting the GNA. Nevertheless, the Libyan Armed Forces lost Oqba bin Nafea airbase in Al Watiyah district western the country and Tarhouna town, and retreated from Tripoli's outskirts. Yet, the LNA has downed around 70 Turkish drones piloted from the capital's Mitiga Airbase.

The GNA is a non-elected government that is recognized by the United Nations. It was formed as provided by the Skhirat Agreement signed in 2015 to be an interim government, and was supposed to dissolve after 1-2 years. Hence, it is considered unconstitutional, particularly it was not formed by elected House of Representatives based in Tobruk.

In 2015, Egypt launched airstrikes against the sites that were held by the Islamic State (IS) to avenge the murder of 21 Egyptian Christian expats.

The minister advocated the activation of the joint Arab defense, and the adoption of the Cairo Declaration underlining a political solution for the crisis.