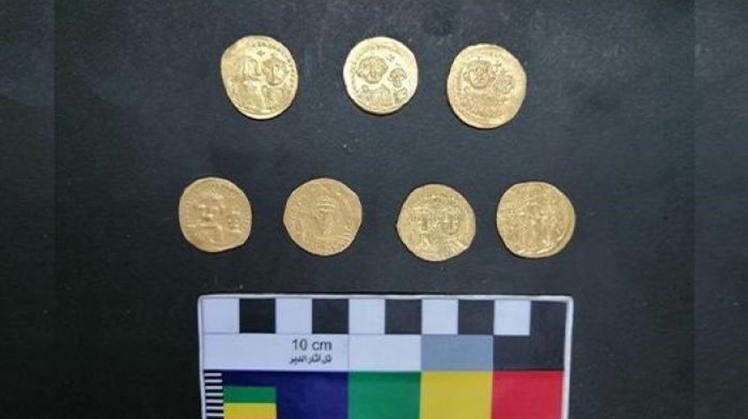 Wed, Dec. 4, 2019
The Egyptian mission working in the monastery of the monastery in the new city of Damietta succeeded in uncovering seven gold coins from the Byzantine era, and a collection of statues of Ashwabti engraved with the cartouche of King Basmatik II, one of the kings of the family.

Dr. Ayman Ashmawy, head of the Egyptian Antiquities Sector at the Ministry of Antiquities, said that all the coins were carved with the inscription of the place where the coin was coined, which means "conop" which means Constantinople. The mission was also able to find many decomposing human remains that were contained inside. Many of the funerary amulets are magnificent in form and precision of details, characterized by the diversity of raw materials and creativity, including amulets of Scarabs, the eye of Horus, the amulets of the heart, the pillar of the grandfather, the knot of Isis, and the amulets of the sacred deities such as Isis, Nephthys, Tawart and Horus.

Dr. Nadia Khedr, head of the central administration of the sea face and head of the archaeological mission, said that on one of the coins discovered inscription embodying the Emperor FOCAS, who ruled the Byzantine Empire in the period (602-610 AD), on the face of the coin depicted the emperor with a beard on top of the cross and holding his right hand on both sides The name of King NFOCAS is inscribed on the back of the emperor standing with his right hand. The spherical cross is inscribed with the word VICTORIA, which means victory. At the bottom of the coin is the word CONOB, which means Constantinople (coinage), in addition to five gold coins which are clearly embodied by Emperor Heraclius. And his son Constantine The largest

The last coin is the emperor Constantine II, who ruled the country from 648 to 668 AD.

It is noteworthy that the area of ​​the monastery hill is a huge cemetery used to bury the dead through the different eras from the late era of the ancient Egyptian history specifically the era of the twenty-sixth family through the Greek era and then the Roman era to the Byzantine era. The limestone sarcophagi, which were well made, were not covered with lavish embodiments of wonderful relatives, which were transferred to the Egyptian Museum of the Great Pyramid.