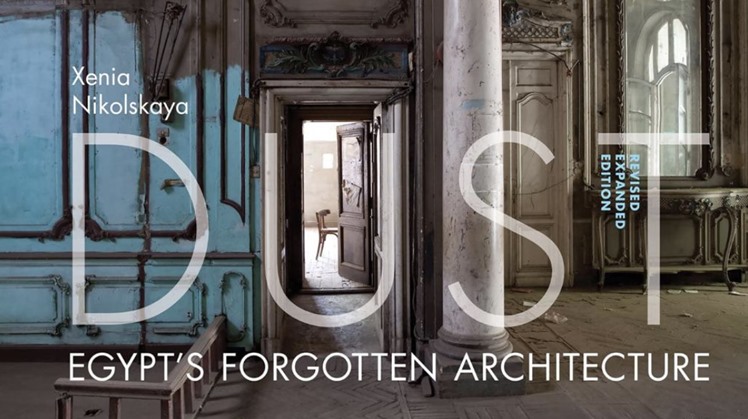 Sun, Jan. 22, 2023
The American University in Cairo Press has released a new and expanded edition of DUST: Egypt's Forgotten Architecture, which includes photographs by photographer Xenia Nikolskaya of Egypt's royal palaces and grand buildings, as well as accompanying articles by Kel By Heba Farid and Omar Najati.

Between 1860 and 1940, Cairo and other large cities in Egypt witnessed a major construction boom, which led to the construction of unconventional palaces and many luxurious buildings that mixed many architectural styles, such as Beaux-Arts and Art Deco, which were influenced by local design materials, but after many years it suffered Those palaces and buildings fell into disrepair and became uninhabited.

In 2006, award-winning Russian-Swedish photographer Zhenya Nikolskaya began the process of documenting and photographing these buildings in about thirty locations in different Egyptian cities, including Cairo, Alexandria, Luxor, Minya, Esna, and Port Said. These images were included in the first edition of Trap: Forgotten Egyptian Architecture and sold out shortly after its 2012 release, becoming a rare collector's book.

Nikolskaya says: “The book explores the state and importance of architectural buildings in Egypt, bringing together an intricate duality of dust or dirt as the material that envelops the city and through which the passage of time is traced on the objects of civilization – as well as as a metaphor for time’s recording of these changes and its formation of memories of the past and the present time. "

This new and expanded edition includes images from the book's first edition as well as new additional images taken by Nikolskaya between 2013 and 2021, and previously unpublished essays by Heba Farid, co-owner of Tanterra Gallery, and architect and urban planner Omar Najati, co-founder of A research platform in the field of urban design.