Egypt's Min. of Culture talks about the knowledge economy at the International Forum (IGCF22) in Sharjah 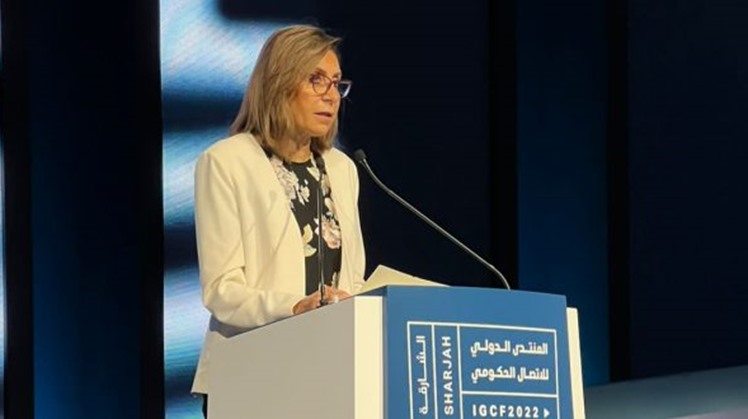 Thu, Sep. 29, 2022
Dr. Nevin Al Kilani, Minister of Culture, participated in the activities of the International Government Communication Forum (IGCF22), held under the patronage of His Highness Sheikh Dr. Sultan bin Muhammad Al Qasimi, Ruler of Sharjah, in the main hall of the Expo Center Sharjah, by delivering a speech entitled “The future of the creative economy.. Are we Are you ready?" .

The Minister of Culture reviewed the prospects for human coexistence in human civilizations, up to our current age of scientific and technological progress, with its positives and negatives. She added that information societies were able to lay the infrastructure for the new digital worlds, which paved the way for creating societies capable of knowledge production.

She pointed to the role of social media in investing innovation and artificial intelligence techniques, among others, noting that social media have become easy platforms, possessing the ingredients that made them attractive to new generations.

She added that new technology is templates that carry human knowledge and deliver it to people in all regions of the world easily, noting that the knowledge economy represents about 7% of global GDP, and is growing at a pace that calls for us to develop strategic and future plans that enable us to participate in the existing new global economy. on knowledge.

She also pointed out that national cultures are an essential pillar in the knowledge economy, and the start of our Arab region on this path, to have an Arab knowledge economy capable of creating a strong connection between our Arab peoples and the peoples of the world, referring to Egypt's efforts under the new republic, which are represented in several axes Preparing an infrastructure suitable for the economics of creativity and knowledge, building specialized and creative human capacities, especially for youth in the field of artificial intelligence, qualifying young generations for leadership within the presidential programs for youth rehabilitation, and building new specialized universities that include disciplines that support investment in knowledge and creativity, stressing that the new administrative capital will be A unique model that expresses the continuity of Egyptian civilization, as it is a city of the fourth generation, and will provide an attractive climate for investment, innovation and creativity, and a unique cultural edifice was established in it, which is one of the largest cultural centers, the City of Culture and Arts.

The Minister of Culture concluded her speech, with Egypt’s faith, as she lays out her future vision 2030 for the vital role of cultural industries in advancing the national economy, building the national character, refining it with the values ​​of authentic Egyptian culture, and enhancing the status of creators and writers, noting the increase in the number of Egyptian publishing houses during the past years, The interest in local book fairs, the development of the Cairo International Book Fair to occupy a prominent position among the international book fairs, and the Egyptian art institutes are working to create generations of creators in various fields, and to rehabilitate creators in the field of intangible cultural heritage, as they are living human treasures, so the interest in cultural industries has risen The demand for Egyptian traditional crafts increased, as a result of the conscious will of the Egyptian political leadership, which put in mind the value of investing in and rebuilding the Egyptian person.