The story of a monument.. Canopic utensils to preserve the guts of the dead and displayed in the Mummification Museum 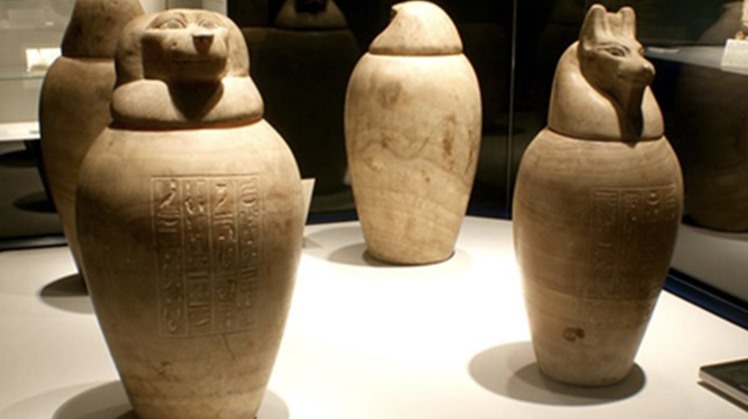 Tue, Aug. 9, 2022
Today, we shed light on archaeological artifacts, namely, the "Canopic vessels of the so-called Waheeb-Ra", which are distinct pieces of art.

The pieces consist of four pots belonging to the so-called Waheeb Ra Munfru Ibn Basmatik, and these pots were used to preserve the entrails of the deceased after embalming, and their covers were in the form of the four sons of Horus. mummification.

The Mummification Museum is located on the Nile Corniche, north of the Luxor Temple. Mummification and the cemetery, in addition to displaying groups of protection amulets, a variety of coffins, and funerary paintings. The museum also displays a number of human mummies and a group of animal mummies such as crocodiles, cats, and fish.

As for the most important pieces displayed in the museum, which was opened on May 7, 1997, and has an area of ​​about 2000 square meters, we mention: The mummy of the priest Masharti, son of King “Ba Negm” of the 21st Dynasty, and he worked as a high priest of Amun in Thebes and an army commander, the column of the The grandfather, a symbol of constancy and continuity, which was sometimes referred to as the backbone of the god "Osiris", mummy covers of the priest "Bady Amun the Fifth" of the 21st dynasty of Deir el-Bahari, two wooden statues of the goddesses Isis and Nephthys, who are considered one of the most important protectors of the deceased, wooden boxes for keeping The shawabti statues (the mujib statues), which were present in large numbers inside the cemetery with the deceased.