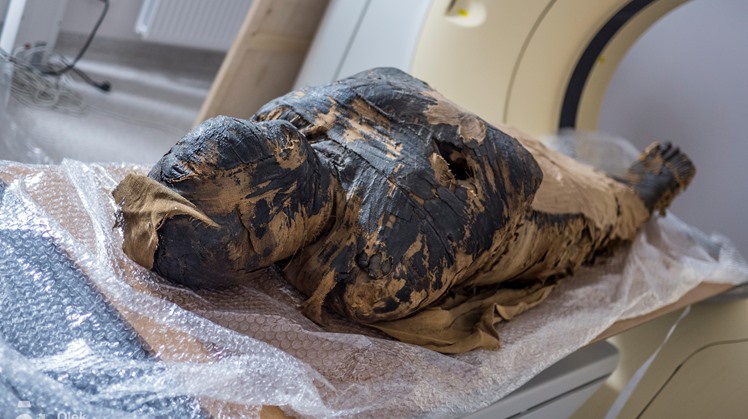 Mon, Aug. 1, 2022
Ancient Egyptian life remains the focus of researchers and scientists around the world, until now. From time to time, a study appears about a piece or mummy of a king or a queen, and recently, after a recent study by Polish scientists, about the ancient Egyptian mummy displayed in the Warsaw Museum, known as "The Mummy" Pregnant, "and it is not the only study, but it was preceded by many studies and research, but the different thing in the last study is the researchers' recognition of an interesting thing about that mummy.

The beginning of the story dates back to May of 2021, when the ancient-origins site published a study published in the Journal of Archaeological Sciences, stating that there were x-ray scans of the mummy’s body by a group of archaeologists, and they concluded that the remains of a woman who died 2000 years ago Inside is a fetus.

The researchers continued in the study that X-rays and CT scans on the embalmed body showed that the woman died when she was between 20 and 30 years old, and they measured the fetal head to ascertain the number of weeks the woman spent in pregnancy and found that she was between 26 to 30 weeks of pregnancy when she died. They note that "this finding is the only known case of a mummified pregnant individual."

But in 2022, and months after archaeologists in Polish Warsaw announced what they called the discovery of “the first pregnant Egyptian mummy known to history”, specifically in 2022, Dr. Sahar Selim, professor of radiology at Cairo University and an expert on mummies, revealed a new surprise about the mummy, stressing that The mummy carried a "liar" and refuted the theory (pickling) endorsed by Polish researchers.

And Dr. Sahar Selim said, during her conversation with “The Seventh Day”, a Polish team announced in April 2021 that they had discovered a fetus inside a CT scan inside an Egyptian mummy from the first century BC preserved in the National Museum in the Polish capital Warsaw, and I read this study as a specialist in mummy rays. Also, for my specialization in the medical field in fetal examinations, and I had many observations that refuted the results of the research, and I was keen that my response to the study was scientific, so I sent it to the same scientific journal that published the Polish research, and my scientific response was published in January 2022 after it was approved by 3 specialized arbitrators, and the periodical allowed the Polish team to respond to my scientific response to their study, which was published in the same issue.

Dr. Sahar Selim confirmed that Polish scientists assumed the presence of a fetus inside the mummy's basin, and thus it was the "first pregnant mummy" that was found, buried with her womb and the pregnant uterus inside.

Dr. Sahar Selim reports that the presence of a fetus inside a mummified mummy has not been found before, as it is incompatible with the Egyptian methods of embalming, but the Polish study assumed that the embalmers left the pregnant uterus inside and mummified the mummy, and the bones of the fetus disappeared and became a scalded mass without bones. Selim adds that these results are inconsistent with the natural stages of decomposition and the mummification process, according to the method of the ancient Egyptians.

In the detailed response of Dr. Sahar Selim in the study published by the American Journal, she confirmed that the pregnant uterus is a very fertile material for bacteria and this leads to decomposition after death, and the survival of the pregnant uterus inside the mummified corpse leads to the inevitable decomposition of the body and the corruption of the mummy, for the same reason the Egyptian embalmer removed The internal viscera and he would not have left a womb bearing a fetus inside the body so as not to damage the corpse, and the assumption that the embalming salts (natron) outside the womb preserved it is a false hypothesis, as salts are never enough to preserve the fetus inside the womb or prevent it from rotting, and from the examinations of thousands of ancient Egyptian mummified mummies preserved in Egypt and in Museums of the world, no scientist has ever found a pregnant womb inside a mummy.

She pointed out that the mass in the womb of this mummy cannot be considered a fetus, as described by the Polish study because it completely lacks any structural or anatomical characteristics of the fetus and does not have any bones. He resembled these swirling lumps while examining hundreds of Egyptian mummies with CT scans as part of her work with the Egyptian Ministry of Tourism and Antiquities.

Sahar Selim added that the Polish study considered that the spherical, oblique part is the head of the fetus, and this seems to be a false hypothesis. In spherical shape as in the search results.

And Sahar Selim adds, that the Polish team in the study published in April 2021 justified the absence of any bones inside the mass. The alleged bones shrunk and faded and nothing was left of them, and they justified that the skeletons of the fetuses are not preserved due to the weakness of calcium in the stages of pregnancy, and Dr. responded . Salim in her article that the bones of fetuses do not fade, and that archaeologists have found many skeletons of fetuses in ancient Egyptian cemeteries, such as the tomb of Claes II in the Dakhla Oasis, and the smallest of them is a fetus of 20 weeks old.