Queen Hatshepsut .. The story of the second woman bearing the title of Pharaoh 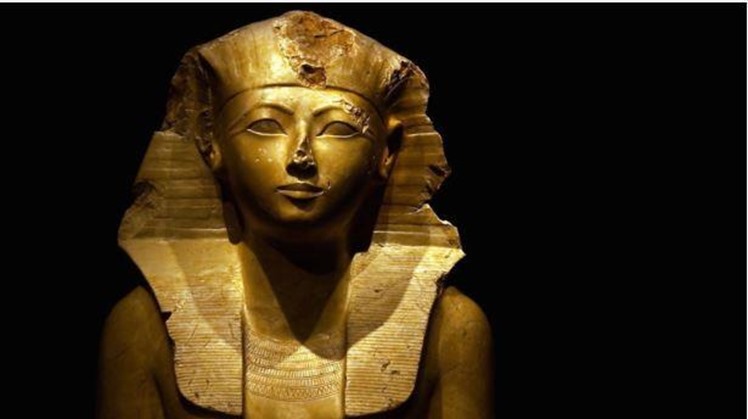 Thu, Jul. 28, 2022
In 1472 BC, the Pharaonic Queen Hatshepsut ascended the throne of ancient Egypt for 22 years. She was considered the second woman to bear the title of Pharaoh, and she was the first woman to take the leadership in decades, while others held the title for only a short period or acted as guardians on behalf of their young sons.

Hatshepsut was born to the daughter of Pharaoh and married her brother at the age of 12 or 13, then her husband died. When she widowed Hatshepsut at the age of sixteen, she demanded her right to rule as a daughter of a pharaoh and a widow of another pharaoh, as the American Discover magazine website mentioned.

Hatshepsut and her mother, Queen Ahmose, ruled together in the early years. Ahmose was very valiant and did not take prisoners.

Hatshepsut learned management methods from her mother and provided Egypt with a source of wealth. She also organized at least four military campaigns in the Kingdom of Kush. It is believed that she traveled with her forces and gave orders and left a legacy of improved infrastructure and trade routes.
Hatshepsut is the fifth king of the ancient Egyptian eighteenth dynasty, and Egyptologists consider her one of the most successful ancient Egyptian kings.
King Ahmose I, who has the great victory and the greatest credit for liberating Egypt from the Hyksos, is considered the great-grandfather of Hatshepsut, and the founder of the Pharaonic Eighteenth Dynasty to which she belongs.