9 Years of Identity Revival.. the most prominent areas that have been developed in mainland Egypt 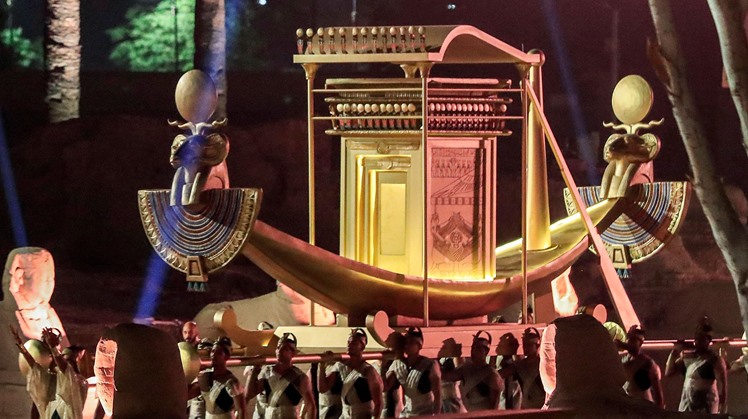 Fri, Jul. 1, 2022
Since President Abdel-Fattah El-Sisi took over the rule of the country, there is a state of prosperity in various aspects, in order to develop and achieve social justice, whether in the economic, educational or health fields, and so on. Which expresses our culture, civilization and ancient history, and all this under the slogan "preserving the identity of Egypt", and to highlight the great cultural heritage that Egypt has for thousands of years, to make Egypt a cultural and tourist front.

The museum’s development work continues on a regular basis, and all development work is progressing simultaneously, so the museum display scenario is implemented, the museum is provided with guiding panels, and a large number of seats for visitors are placed.

Al Haram Plateau Development Project
The state is about to complete the project, which cost nearly 400 million pounds, which was provided in two phases, where the construction works were fully completed, and the implementation of the project began in January 2009, and the works were expected to be implemented during a time program of 3 years ending in 2012, but implementation work stopped since 2011, until President El-Sisi took power and directed the speedy completion of the project, within the strategy of preserving the archaeological heritage and the natural heritage of the plateau and raising the quality of the visitor’s experience.

The project aims to coordinate and organize all cars, vehicles, buses and building elements for tourist, administrative and recreational service activities, with the provision of informative and guiding signs and relying on pedestrian movement by providing and designing pedestrian-friendly paths.

There will also be one center for visitors as a transitional area, accessed from the new entrance from the Cairo-Fayoum road, on an area of ​​about 4000 square meters. It also contains an area of ​​500 square meters dedicated to the use of bazaars, cafeterias and activities to collect revenue to increase antiquities income and increase national income.

And allocating the area for walking, horse riding and the market area is designated by the scheme in the third outer zone of the area, at a safe distance away from the archaeological zone and its direct area, separated by a security fence.

In addition to the sound and light area, the plan adopts the transfer of the open theater for sound and light shows and its services to the limits of the outer range at the walls of the current area, and thus being able to remove all facilities from the direct campus of the Sphinx area and the archaeological excavations area.

The development of Historic Cairo
The historic city of Cairo is one of the most important and largest heritage cities in the world, as it is a lively city characterized by the richness of its urban fabric, in addition to the multiplicity of monuments and historical buildings, reflecting the long history of Cairo as the dominant and leading political, cultural, commercial and religious capital in the Middle East and the Mediterranean basin.

President Abdel-Fattah El-Sisi assigned the government to develop Historic Cairo, evacuating the governorate from ministries and government administrative headquarters, which would allow Cairo to return to its historical, cultural, tourist and archaeological role.

Historic Cairo includes several sites that represent a unique form of human settlement that mixes the religious and residential uses of the place, namely: Fustat, ancient Egypt, the central region that includes Al-Qata’a, the Tulunid royal city, the Citadel area, Al-Darb Al-Ahmar, the Fatimid nucleus, the port of Bulaq, and the Mosque army.


After the June 30 revolution, the Egyptian state worked to develop the Maine Rahina area. The development project included defining the itineraries for visiting the temples area in Mit Rahina, establishing a tourist market to sell souvenirs, and establishing a visitor center that tells the history of this ancient area, at a cost of 26 million pounds, and indeed it was opened in 2017.

This area represents the capital of ancient Egypt at the beginning of Egyptian history, where King Mina "Narmer" took it as the capital of Egypt, and it was called the "White Wall" and then "Memphis" later. The Mummification Temple, the Temple of the Goddess Hathor, and the Museum of the Colossal Statue of Ramses II. The museum will be developed within the comprehensive development project.

Baron Palace development
Baron Palace is an architectural masterpiece in the Heliopolis region. It was completely neglected before the June 30 revolution, but the state was keen to start its restoration in 2017, and President Abdel Fattah El-Sisi, President of the Republic, was keen to open the Baron Empan Palace in Heliopolis, after the completion of its first comprehensive restoration and development process in 2020. , so that the spirit returns to it as a distinctive historical shrine and becomes an exhibition that tells the history of the Heliopolis neighborhood.

The restoration process showed what distinguishes the palace from a style inspired by Indian architecture, which was built by the Belgian millionaire Baron Edward Empain, "September 20, 1852 - July 22, 1929", who came to Egypt from India at the end of the nineteenth century shortly after the opening of the Suez Canal This is the first time that the palace has witnessed an integrated restoration process, at a cost of more than 100 million pounds.

The road of rams
The revival of the Pharaonic Rams Road is the focus of the state’s attention after President Abdel Fattah al-Sisi took over the rule of Egypt, given that it is one of the most important national projects in the archaeological and tourism field, in the heart of Luxor, which guarantees tourist groups a tourist trip between heritage and ancient Pharaonic civilization, with a length of 2,700 meters, starting from Luxor Temple on the Nile Corniche, even the historic Karnak temples.

Excavations began on the road at the end of the 1940s by the archaeologist Zakaria Ghoneim, followed by Dr. Mohamed Abdel Qader, who discovered the beginning of the road at the Luxor Temple in the 1950s, then Dr. Mahmoud Abdel Razek discovered parts of the road at the Luxor Temple during the 1960s, and after a period of pause Dr. Muhammad al-Sagheer discovered various parts of the road in the middle and at its beginning near the Karnak Temple during the eighties and nineties until the beginning of the third millennium, followed by Dr. Mansour Brik, who revealed the rest of the road during the period from 2006 AD until 2011 AD until work stopped after the events of January due to a lack of The financial appropriations, but after President Abdel Fattah al-Sisi assumed the rule of Egypt, work was resumed again in 2017 to reveal the rest of the road and it was opened for the inauguration of the visit, in a solemn celebration witnessed by the world.

Eye stream wall
The Egyptian state is continuing the work of restoring the wall and the area on an ongoing basis to complete it and open it as soon as possible, within the framework of the ministry’s project to restore the historical wall and the surrounding area, which has turned into an important tourist attraction and will soon become one of the most important tourist and recreational places in Cairo.

The project to develop the Magra El-Ayoun wall aims to revive this historical area and re-highlight its civilized splendor, with its cultural value, to represent a new addition to the map of archaeological and tourist destinations in Egypt. And a major tourist destination at the regional and global levels.

The idea of ​​development is based on creating a linking axis from north to south that links the geographical space of Historic Cairo with its historical metropolises by supporting the integration of several commercial, craft, tourism and cultural activities along this axis, to confirm the historical continuity of Historic Cairo, and allows for the first time to enjoy more than 313 monuments registered in the scope of Historic Cairo.

The general plan of the design idea of ​​the development project also includes the establishment of a culture and art area, which will provide spaces used as an open theater, theaters and cinemas, in addition to a museum and exhibitions of fine arts, a public library, a hall for seminars and conferences, as well as places dedicated to folk performances, a center for kinetic arts, as well as a Establishing an area for recreational and tourism services that includes a number of restaurants, spaces and open yards, with a focus on attracting the quality of restaurants that offer traditional Egyptian cuisine, to other Arab and international kitchens.

Mary's Tree Development Project
The Egyptian state, represented by the Ministry of Tourism and Antiquities, has completed a large percentage of the maintenance project, which takes place inside the archaeological Mary tree, which is one of the itinerary points of the Holy Family’s journey in Egypt. Lighting and installing a wooden fence around the ancient tree to protect it permanently. The well adjacent to the tree was also disinfected, along with the development of the waterfall in it. The development of the park adjacent to the Maryam tree area was completed and the road leading to it was prepared, in cooperation with the Cairo Governorate.

In 2002, the foundation stone for this gigantic project was laid, the implementation of which was delayed due to the funding crisis, and the museum remained in this state even before 2014, when it was looking for sources of funding until the construction work was completed, and the construction work continued to run like a turtle, along with the slow movement of artifacts. From museums and various sites to the museum’s restoration center, the volume of completion at that time was only 20%.

In 2014, President Abdel Fattah El-Sisi directed work inside the Grand Egyptian Museum and the speedy completion of it completely, and since this year until now the museum has been working continuously with all the necessary funds provided, and it was accomplished in 8 years, with what has not been accomplished in 12 years.

The volume of completion during the current period in the entrance hall and the great staircase has reached 99.8%, and the finishes of King Tutankhamun’s hall have been completed by more than 99%, in addition to the placement and installation of more than 4,700 artifacts from King Tutankhamun’s treasures. The finishes of the main exhibition halls are 96% complete, and so far more than 56,000 artifacts have been transferred to the museum.

The external squares and green spaces have been completed by 98%, and the volume of completion in the surrounding external roads has reached 92%, and in the facade overlooking the pyramids has reached 99.8%. This is in addition to the completion of 100% of the concrete and metal hull works for the Khufu Boat Museum, and the necessary finishing works are underway for the building.