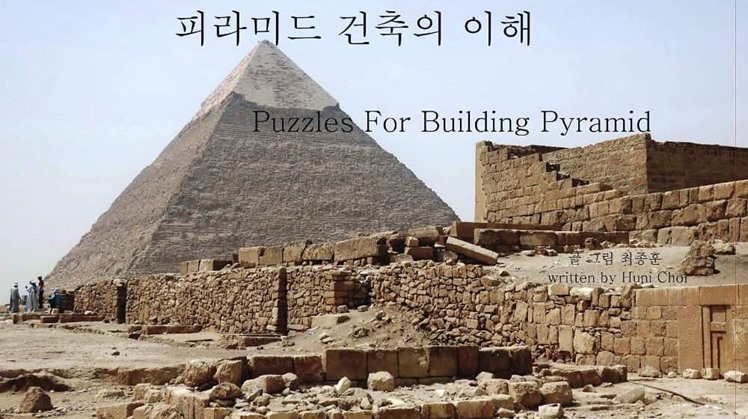 Mon, Jun. 20, 2022
The pyramids are the obsession of the ancient and modern world, the kiss of tourists and the wish of adventurers, and the love of celebrities in all countries of the world, despite the passage of thousands of years since their construction, the pyramids are still the most powerful symbols of Egyptian civilization to this day, and the pyramids are not only the goal of every visitor to Egypt, they are also a source of inspiration for art and life culture in the Nile.

The pyramids, with all their symbol of glory in the ancient Egyptian civilization, represent an obsession and passion among many foreign researchers to talk about them and their strange secrets, and perhaps the last books that dealt with the pyramids, is a book recently published by the "Sachon" house in the Republic of South Korea, which is the book of the Korean researcher ( Cho Hongjun) entitled "The Miracle of the Great Pyramid".

Through him, the researcher presented his hypothesis on how to build the Great Pyramid, which is hypothetical worthy of discussion. At first, he asserts that his hypothesis is better understood by architects, but non-architects often do not.


The researcher's hypothesis is based on the fact that building a square pyramid with a height of 146 meters and a base of 230 meters, like the pyramid of Khufu, is very difficult, but it is easier and logical to do so on the basis of the trapezoid.

The Czech Egyptologist Miroslav Werner’s book entitled “Pyramids”, which was published 20 years ago, stated that the pyramids that are considered miracles of the world are the ones in Egypt, which are similar to the pyramids of Mexico, but the pyramids of Mexico differ significantly from the Egyptian pyramids, as the Egyptian pyramids are at the top.
In the book of the American Egyptologist Mark Lehner entitled (The Complete Pyramid), he talked about the greatness and difficulty of reaching a square top like the Great Pyramid, and the South Korean researcher (Chu Hong Jun) agreed with the Japanese Egyptologist Yoshimura that it is possible to reach a height of 80 meters using the slope method. Then it is impossible to rise due to the narrowness of the corridors and the greatness of the height.

As stated by the Korean researcher: As the width becomes narrower, the length becomes shorter, and the remaining height may need to be achieved by using helicopters. The Korean researcher assumes that the stones that were used are equivalent to 600 million tons using the slopes - to reach the height of the Great Pyramid of 146 meters with a base of 230 meters, where the number of stone layers in the Great Pyramid is about 200 layers, and the lower part of those layers is about 1.5 meters, and smaller Generally when ascending, and the upper part is about 60 cm.. Thus, there will be a sub-complex of 600 million square feet inside, and then it is assumed that after reaching the highest point in the pyramid they had to remove 200 million tons of stone from the outside - and these stones may have been recycled later In building the small pyramids for the king's wives - and going down a slope of 51.5 degrees.