Treasures of the Tahrir Museum.. the mummy of a hunting hound found near the tomb of King Amenhotep 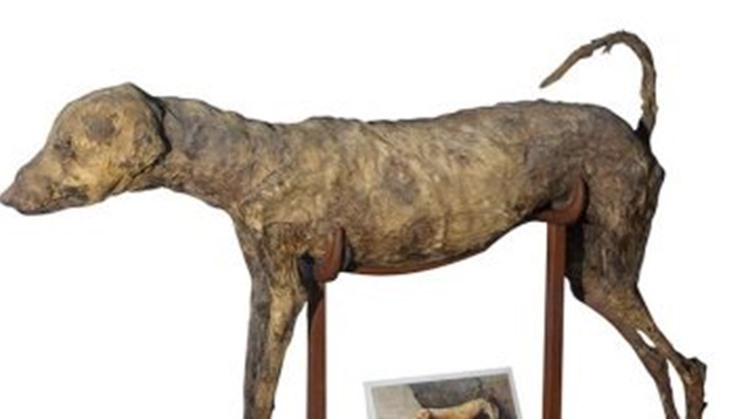 Thu, Jun. 16, 2022
The Egyptian Museum in Tahrir contains a large collection of artifacts, with more than 50,000 pieces on display, including the "mummy of a hunting dog", where the ancient Egyptian excelled in mummification, and reached a high degree of accuracy and craftsmanship.

The mummy of a hunting dog was displayed in the Egyptian Museum in Tahrir in room 53 - upper floor, and was found in tomb KV 50 near the tomb of King Amenhotep II (family 18).

The Egyptian Museum in Tahrir, in the heart of Cairo, includes the largest collection of ancient Egyptian antiquities, containing more than 136 thousand Pharaonic antiquities, in addition to hundreds of thousands of antiquities in its stores. On June 29, 1835 AD, Muhammad Ali Pasha ordered the establishment of the Antiquities Authority and the Egyptian Museum , and assigned their management to Youssef Zia Effendi, under the supervision of Rifa'a Al-Tahtawi.

The story of the museum’s founding began with the great global interest in Egyptian antiquities after deciphering the Rosetta Stone at the hands of the French scientist Champollion. And entrusted their management to Youssef Zia Effendi, under the supervision of Refa'a Al-Tahtawi.

After the death of Muhammad Ali, antiquities were stolen again and his successors followed the gifting approach, so the museum’s holdings dwindled, and in 1858 AD, “Marriet” was appointed as the first warden to occupy the antiquities, i.e. what currently corresponds to the head of the Antiquities Department. Choosing the Bulaq area to establish a museum of Egyptian antiquities and transfer to it the antiquities that were found during his excavations, "such as the traces of the tomb of Ahhotep."

In 1863, Khedive Ismail approved the project to establish a museum of Egyptian antiquities, but the project was not implemented, but rather gave Mariette a place in front of the Antikhana House in Bulaq to expand his museum. In 1881 AD, and in the same year, Mariette died and was succeeded by "Maspero" as Director of Antiquities and the Museum.

In 1890 AD, when the collections of the Bulaq Museum increased, they were transferred to the Saray of Giza, and when the scientist “De Morgan” came as head of the interest and the museum, he re-arranged these collections in the new museum, which was known as the Giza Museum, and in the period from 1897-1899 AD, Laurier came as Morgan’s successor But Maspero returned again to run the department and the museum from 1899 - 1914, and in 1902 he transferred the antiquities to the current building of the museum "in Tahrir Square." One of his most active assistants in his second period of work was the Egyptian scientist Ahmed Pasha Kamal, who was the first to specialize in antiquities. Ancient Egyptian and worked for many years in the museum.

The first Egyptian director of the museum was Mahmoud Hamza, who was appointed in 1950 AD. The museum had a brief guide by Maspero dating back to 1883 AD, but he made a large guide for the new museum, which has been printed and repeated from 1915 AD until now.