Facts about the pyramids of Giza.. It was built near the "Lost City" and its southern outskirts are interconnected 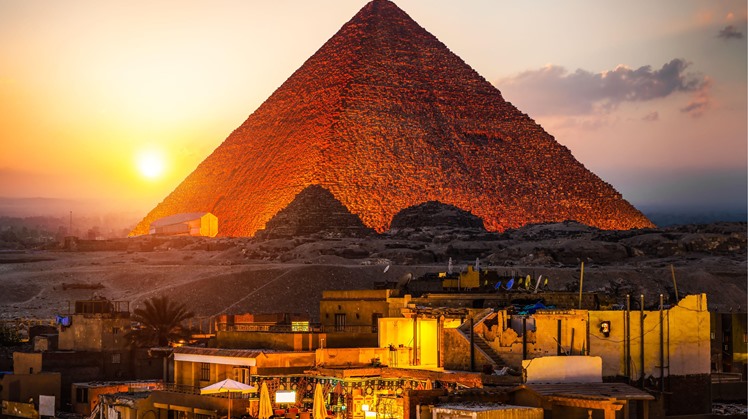 Mon, May. 9, 2022
The pyramids of Khufu, Khafre and Menkaure were built in the twenty-sixth and twenty-fifth centuries BC (about 2600 BC - 2400 BC), and they are one of the marvels of time that remained witness to ancient planning and engineering in the era of the pharaohs.

The exact years in which they were built are somewhat unclear, as those dates depend on the exact time of the rule of the pharaohs who built them, and is a subject of debate among scholars. For example, the Metropolitan Museum of Art dates the reign of Khufu as 2551-2528 BC, and Khafre 2520-2494 BC and Menkaure 2490 - 2472 BC, however, different sources and scholars have different estimates of the date of each pharaoh's rule according to Live Science.

The way these pyramids were built is also a source of speculation and debate, as many researchers believe that a sloping geometric system was used in some form to move the blocks into place during construction, and when the pyramids were completed they were completely or partially encased in white limestone, most of which is lost today.

Research indicates that when the blocks were moved across the desert a small amount of water was placed on the sand which made it easier to move them. In 2018, researchers found a strange 4,500-year-old tool in the Eastern Desert that may have been used to help move the blocks up a slope. Central, surrounded by stairs with many holes, while researchers said that a similar method may have been used in Giza.

In addition, Mediterranean archaeologists found evidence that Giza had a busy port, which allowed goods to be shipped to the site from all over ancient Egypt and the East. Researchers also found that the goods brought included limestone from Tora (a region in Egypt). Cedar wood from Lebanon.

Despite the differences between the three pyramids, the pyramid of Khufu is several times the mass of Menkaure, the southeastern ends of each pyramid are closely connected to each other, and each pyramid has a mortuary temple and a valley, with a bridge connecting them, and there were smaller pyramids referred to as satellite pyramids Or the pyramids of queens.

To the south of the pyramids lies a settlement that archaeologists sometimes refer to as the "Lost City." Live Science previously reported that this city had barracks that may have housed soldiers. Archaeologists have discovered a palace in the city that was used by high-ranking officials. Pyramid workers may have lived in simpler dwellings located next to the pyramids themselves.