800 ancient tombs.. Learn all about the Hawaweesh cemetery in Sohag 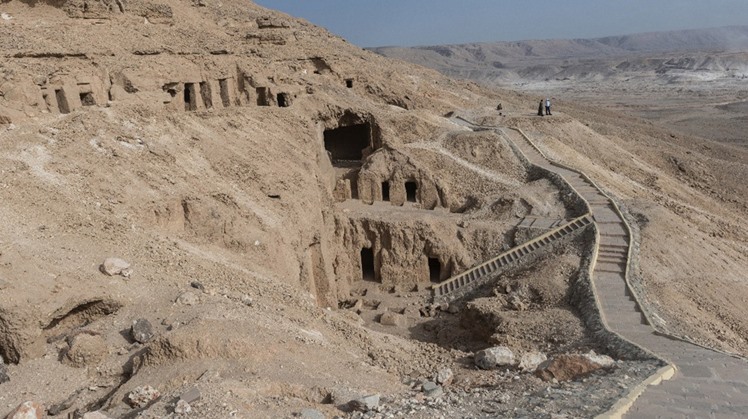 Wed, Jan. 12, 2022
Al-Hawaweesh necropolis is considered one of the most prominent archaeological sites in Sohag, where Al-Hawaweesh is located about 10 km east of Sohag, and about 7 km from the city of Akhmim, which served as its main cemetery during the Old Kingdom, which attracted the Australian Research Council and the Australian Center for Egyptology Research of Macquarie University to conduct a Scientific excavations at the site in the period from the early eighties until the early nineties.

Al-Hawaweesh Cemetery contains more than 800 tombs dating back to the Old Kingdom (2494-2181 BC) and the First Intermediate Period (2181-2055 BC), and about 60 cemeteries still preserve some inscriptions, funerary scenes, offerings, daily life, dancing and hunting. And agriculture in the old Akhmim, while five tombs of them are very well preserved.


The ancient state extends across the dynasties from the third to the sixth, as the king’s power increased during that period, and King Zoser, the first king of the Third Dynasty, built his step pyramid in Saqqara, where he wanted to build a tomb in the form of a terrace in the style of his predecessors, the kings of the first and second dynasties, but those The terraces increased to reach about five terraces, one above the other, to be the first stone pyramid in the history of the country, but his successors were unable to complete their pyramids, perhaps because of the short period of their rule.

The era of the first transition
The era of the first transition It is in the period between "2181 BC / 2055 BC", an era that witnessed much of the latest, and which affected the weakness of the kings of the Sixth Dynasty in Egypt and led to the loss of control over the country, which led to an increase in the influence and power of the rulers of the regions. They became completely independent from the central government in Memphis and worked to expand their territories and formed their own forces. This led to civil wars and a deterioration in the political and economic conditions, which also resulted in the exposure of hierarchical groups to theft.