Egypt signs an agreement for cultural and technical cooperation with Jordan 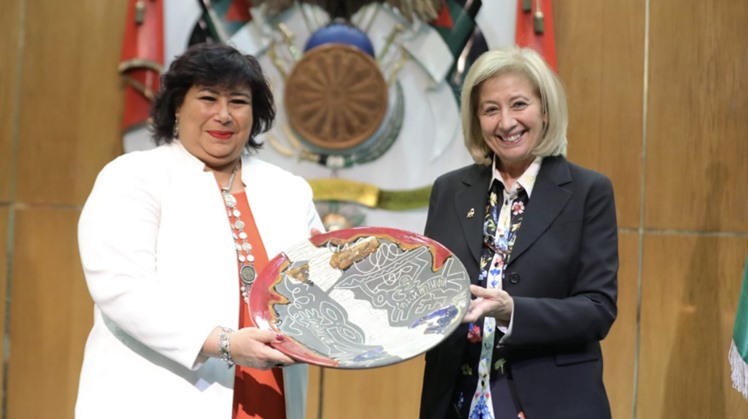 Wed, Oct. 13, 2021
The artist, Dr. Enas Abdel Dayem, Minister of Culture, representing the Egyptian government, and Haifa Al-Najjar, Minister of Culture of Jordan, on behalf of her country's government, signed an agreement for cultural and artistic cooperation between the two countries, in the presence of Sherif Kamel, Egypt's Ambassador to Jordan, and Hazza Al Barari, Secretary-General of the Jordanian Ministry of Culture, at the Royal Cultural Center. It includes a program Executively between the two sides for the years 2021-2023, in order to support and enhance the distinguished bilateral relations of brotherhood and friendship in various fields, and to complement the implementation of the cooperation agreements concluded between the two brotherly countries signed in Amman in the eighties of the last century.

Enas Abdel Dayem said that the bilateral relations between Egypt and Jordan have long roots, which confirms the deep visions of President Abdel Fattah El-Sisi and King Abdullah II of the importance of supporting and developing cultural relations between the two countries, adding that the cooperation aims to invest in historical ties to create more cultural blending between the two brotherly peoples by using The soft forces, and stressed that the creative and reciprocal fields included in the cooperation protocol work to present various forms of artistic and intellectual movement to members of the Egyptian and Jordanian societies.

For her part, Haifa Al-Najjar expressed her happiness at concluding this protocol, which comes at the beginning of her duties as the Ministry of Culture, and expressed her welcome to the Egyptian Minister of Culture, Enas Abdel Dayem.

It is also well-established and historical relations devoted by King Abdullah II and President Abdel Fattah al-Sisi in coordinating their common positions on Arab issues, the most important of which is the first Arab issue, the Palestine issue, on top of which is the Arabism of Al-Quds Al-Sharif.

We are pleased that the Cairo Opera Orchestra's participation in the symphony of the Hashemite Kingdom of Jordan, as part of the Kingdom's celebrations of the establishment of the Jordanian state, coincides with the signing of the executive program for cultural cooperation between our two brotherly countries.

Sherif Kamel, Egypt’s ambassador to Jordan, stressed that this protocol is the culmination of the cultural and artistic efforts of the two countries, and the support for cultural investment between them enhances the relations between the two brotherly peoples. He added that the executive program of the cultural cooperation protocol between Egypt and Jordan includes five main axes in several cultural and artistic fields, namely:

First, in the field of libraries
The two sides work to coordinate with each other in the field of library legislation in addition to cooperation in the field of copyright and neighboring rights, indexing, archiving and classification, holding book fairs and cultural and artistic publications, participating in book fairs held in both countries, and exchanging all information containers free of charge from publications, books, publications and photos Others that will help develop documentary and cultural knowledge between them, especially those related to both countries, provided that the two sides develop any possible electronic linking activities for the mutual benefit between them and for the benefit of researchers.

Second: In the field of conferences, lectures and cultural seminars:
The two sides encourage participation in cultural and intellectual conferences, seminars and training courses held in various cultural fields, and the two sides work on exchanging lecturers, experts, information and visits between workers in cultural bodies, institutions and fields, including children's culture in both countries.

Third: In the field of arts, performing and cinematic arts, and intangible cultural heritage:
The two sides encourage cooperation in various fields of arts, literature and heritage that aim to promote the cultural heritage of both countries through organizing and exchanging exhibitions of heritage, handicraft, contemporary, plastic and photographic arts, exchanging concerts, folkloric and theatrical performances, and participating in international art festivals and competitions held in both countries. The two countries, in addition to cooperation between them in the field of cinema through exchanging documentaries and narrative films, participating in film weeks and festivals held in both countries, and benefiting from the Egyptian experience in filmmaking by holding training workshops for technicians and workers in this field, and producing joint cinematic works.

It also includes exchanging experiences in the field of plastic and folk arts through the exchange of trainers, artists and professors, exchanging experiences on intangible cultural heritage through the field of protection and preservation of intangible cultural heritage vocabulary, benefiting from the experience of the other side in promoting heritage projects in the local community, and preparing nomination files Heritage elements on each of the representative lists on the world heritage and the urgent preservation lists. The Jordanian side is also allowed to benefit from the Egyptian experience with regard to traditional handicraft industries and how to develop and market them.