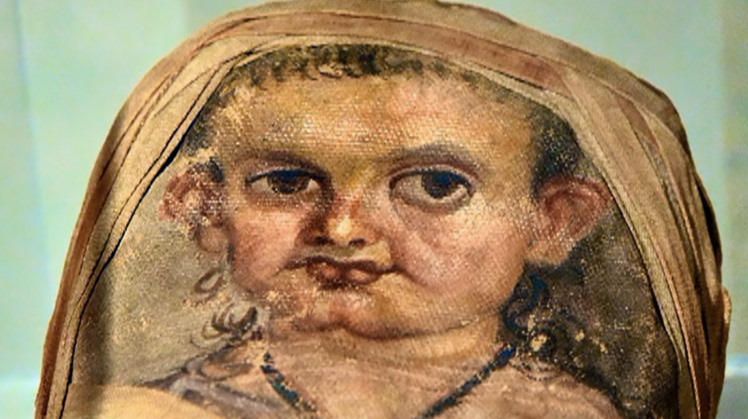 Mon, Oct. 11, 2021
The Faiyum mummy portraits consist of a group of vibrant paintings drawn on thin wooden panels and placed directly over the mummy in Roman Egypt, the vast majority of which date back to the first and second centuries AD. Hundreds of mummy portraits have been excavated, and the largest collection outside Egypt is in the Petrie Museum in London.

Allen's Tomb, an ancient Egyptian tomb from the reign of the Roman Emperor Tiberius (14-37 AD) was discovered in Hawara in 1892, in which the images were painted directly on the mummy's cover canvas.

Egyptian lands came under the control of Rome after the death of Cleopatra VII in 30 BC, which led to the end of the Ptolemaic dynasty that had ruled Egypt since the death of Alexander the Great in 323 BC.

After the murder of Gaius Julius Caesar in 44 B.C. the Roman Republic was left in turmoil, and the young queen joined forces with Roman commander Mark Antony, but their defeat at the Battle of Actium in 31 B.C. brought Caesar's adopted son and heir apparent, Gaius Julius Octavius ​​(Octavian), to the shores. Egyptian. Cleopatra chose to commit suicide rather than face the humiliation of captivity.

The presence of Rome in Egypt was preceded by Julius Caesar and Octavian, and the Romans periodically participated in Egyptian politics since the days of Ptolemy VI in the second century BC. turmoil and internal conflict.

The country lived for decades under the umbrella of a Greek-speaking dynasty. Although Alexandria was a center of culture and thought, it was a Greek city surrounded by non-Greeks. The Ptolemies, with the exception of Cleopatra VII, did not travel outside the city.