Agreement of cooperation and cultural exchange between the Syndicate of Egyptian Writers and the Federation of Dagestan..I know its terms بنود 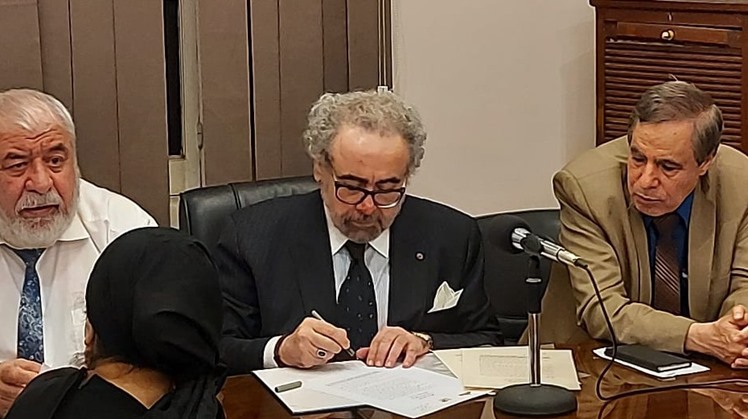 Wed, Jul. 7, 2021
The General Syndicate of the Egyptian Writers Union, headed by the poet and critic Dr. Alaa Abdel-Hadi, signed an agreement of cooperation and cultural exchange with the Writers Union of the Republic of Dagestan, headed by Dr. Majmed Akhmedovich Akhmedov.


The poet Dr. Alaa Abdel Hadi said that the agreement came out of the common desire of the General Syndicate of the Egyptian Writers Union and the Dagestan Writers Union to support the bonds of cultural relations between their members, in order to achieve cultural cooperation between writers and writers in the two friendly countries.


The two parties agreed on the following:
1- Translating selections of literary works in each of the two countries to increase mutual cultural awareness between the Egyptian and Dagestan peoples, and exchange translation of book works in the two countries.

2- Supporting the mutual cultural relations between the General Syndicate of the Egyptian Writers Union and the Dagestan Writers Union, by publishing literary books and the works of writers and poets in the two countries, especially those that shed light on the history of the previous and contemporary Egyptian and Dagestan cultural and literary relations.

During the signing of the agreement 3- The two parties exchange delegations by one delegation each year for both of them, provided that the delegation consists of at least two members, and for a period of one week, interspersed with a cultural activity that includes lectures, seminars and intellectual and literary meetings, so that the guest takes care of the travel tickets of its members, and this includes major literary events in The two states.

4- The two parties exchange the periodicals issued by each of them at the rate of ten copies of each issue of one periodical, as well as the publications and documents that the two parties are interested in.

5- Organizing joint celebrations on various literary occasions, which are organized by the two parties.


7- Each of the two parties should provide the members of the other cultural body with the necessary facilities within the limits of its capabilities, provided that the member carries a letter of recommendation or a recommendation from his body.

8- Each party publishes in its own publications an annual file on literature and thought, in the country of the other party, provided that each party prepares the file related to it and provides its counterpart with it, including an introduction to its publications.

9- Participation in book fairs held in both countries.


10- That representatives of the two parties meet, if one of them is called for that, in order to conduct new discussions or consultations on all matters related to literary and cultural issues.

11- The two parties shall develop executive programs for their joint activity in implementation of the terms of the agreement.

This agreement is valid for a period of five years, subject to renewal, unless one of the parties wishes to amend it, and in the event that neither party expresses its desire to terminate it in writing six months before the expiry of its term, the agreement shall be considered automatically renewed for another similar period.