Installing all the kings at the Grand Egyptian Museum.. What is the message of the Great Staircase? 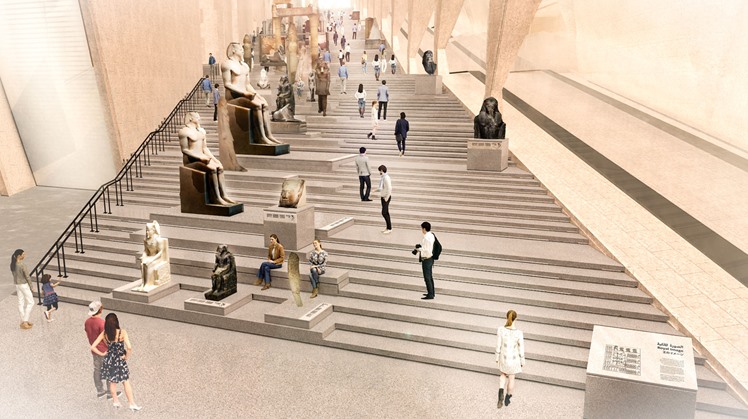 Thu, Jun. 10, 2021
The Grand Egyptian Museum has completed 100% of the installation of heavy artifacts in the lobby and the great staircase, and the meticulous restoration work is under way, which included nearly 72 pieces of the most important and largest Egyptian antiquities for the kings of Egypt, which amount to hundreds of tons, so what is the main message of the Great Staircase ?.

The main message of the Great Staircase in the Grand Egyptian Museum will serve as an introduction to the museum, and will focus on the various powers of the king and is called Zone 1, and the lobby will contain the visual expression of the essence of the theme of kingship with a main theme, a huge statue of King Ramses II, where the king was head of government, commander of the army And the chief priest of all the gods in every temple, the king was also the mediator between the gods and the people of Egypt, and his presence was a link between heaven and earth and the souls of the dead.

The Great Staircase focuses on two subjects, the royal image, gods and kings, and is divided into four sections, and the first section will deal with how the king was embodied in three-dimensional statues, and impressive statues with more details, and the exhibits will be arranged in history from the era of the Old Kingdom until the Roman era, As for the second section, it focuses on the status of the goddess, and this will include the representation of the kings during their participation in religious rituals and offering offerings to the gods, and this will be displayed in addition to the pillars, columns and other distinctive elements of the temples that were built to the gods commissioned by the king, and vary between the ancient, middle and modern state.