The 67th anniversary of the discovery of the boats of the sun .. What is its relationship with the deity "Ra" and the world of the dead? 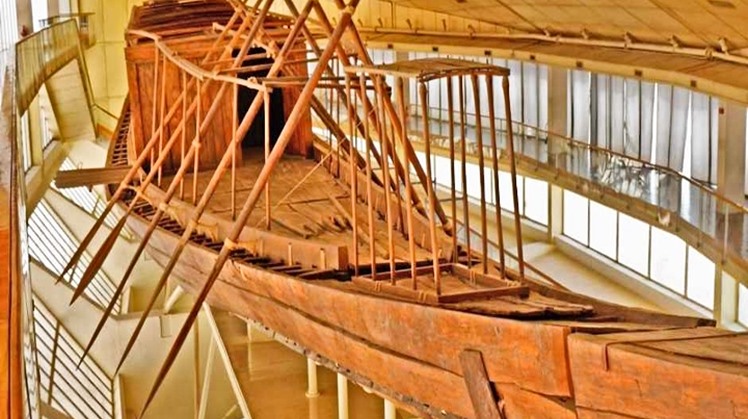 Thu, May. 27, 2021
Today, the 67th anniversary of the discovery of the sun boats or the khufu ship, known as the sun boat, by the archaeologist and journalist Kamal al-Malakh on May 26, 1954, with two roofed pits at the base of the southern Khufu pyramid, at the bottom of one of them was found on a dismantled ship beautifully carved of cedar wood. The number of parts of the boat 1224, no part missing.

The funeral boats were used to transport the king's mummy to visit the holy places of the god Osiris, including Abydos in the south and Boto in the north, in addition to this type of boats was also used to transport the body of the king from his palace in which he resides to the cemetery where his pyramid is located. .

The myth of the "god Ra", meaning "the disk of the sun", relates that he is a child at sunrise, then a full man at noon, then he becomes old in the evening, riding two boats, known as "Boats of Ra", with which he crosses the day as he rises in the sky, then He disappears from sight at sunset, and begins the journey of the heavenly sea during the night, and the two boats bear the name of the god-king, after his death during his sacred journey to the world of light, according to legend, and "the boat of the sun", or "the boat of Khufu."

While some believe that they are not funerals, but rather two solar vehicles that the god Ra - the sun god - uses with the king on his day and night journey, the stars help him in sailing and blasphemy, as in that journey the god cleans the world from evil spirits, and thus the people sanctify him and offer him sacrifices. Thanks and grateful.

And it was called the sun boat and it was called Khufu's ship, and it is known that the funerary ships to go to restore life from the holy places are ships of the spirit of the gods, and the legend of Ra relates that he is a child at his sunrise (Khaburi) an old man at noon (Ra), an old man at evening (Atum) lives in two boats according to the belief of the pharaohs. Ra, which is the disc of the sun, and the sun had two ships in the heavenly sea.
The sun’s daily journey through the sky was inspired by myths that merged Ra in the sun, as texts describe the sunrise on the far eastern shore, where a band of monkeys greeted him as soon as they appeared from the water. The evening after that he moves from his day ship to the night ship waiting for him in the underworld before sunrise again.