The Ramesseum Temple, one of the many proves of the greatness of the Egyptians 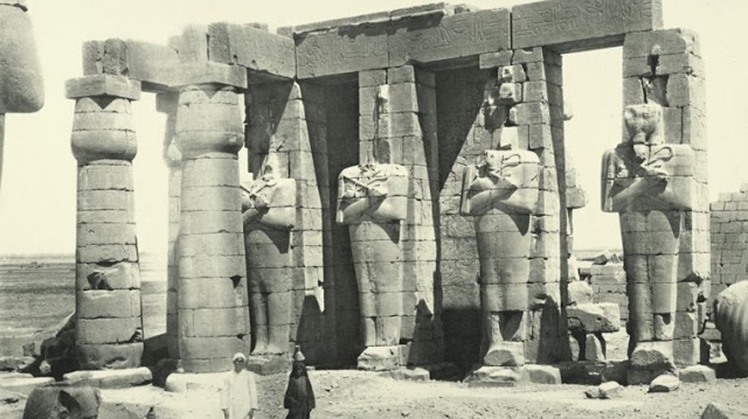 Sat, May. 1, 2021
Today, we see a picture of the Pharaonic Ramesseum Temple, which was created by Ramses the Second, which is one of the true proofs of the greatness of the Pharaohs and the strength of their civilization, and it is my good fortune that I visited the Ramesseum temple in Luxor, or specifically what was left of it, and there I stood submissively in the presence of greatness, strength and feeling very.

The temple was called “Wasser Maat Ra,” which was pronounced “Aussi Ma Ra.” Today, it is “The Temple of Ramesseum” in reference to Ramses II, where it was dedicated to the worship of the god Amun, and its façade was adorned with four flagpoles, and on its interior façade were inscribed scenes of the famous Kadesh site. .

On both sides of the entrance to the edifice from the inside, there are remnants of the scenes of Ramses II in his various relations with Min, Ammon, Horus, Hathor, Ptah, Seshat, Maat and other deities, and it has inscriptions representing the hitting of Hittite spies, a military camp and the arrival of Egyptian war vehicles, and in the south tower there is a view of the king in his war chariot and in front of him Chariots of the Hittites while trying to attack them, and a scene representing the city of Kadesh within its strong walls, and the scene of the king catching his enemies and beating them.

The Egyptian-French Antiquities Mission headed by Christian Laplan, working at the Ramesseum temple in the western mainland in Luxor, found important remains of the temple dating back to the era of the 19th and 20th Pharaonic dynasties, including a group of public kitchens, butcher's buildings and huge stores, in addition to the school that used to be Dedicated to the education of workers' children.