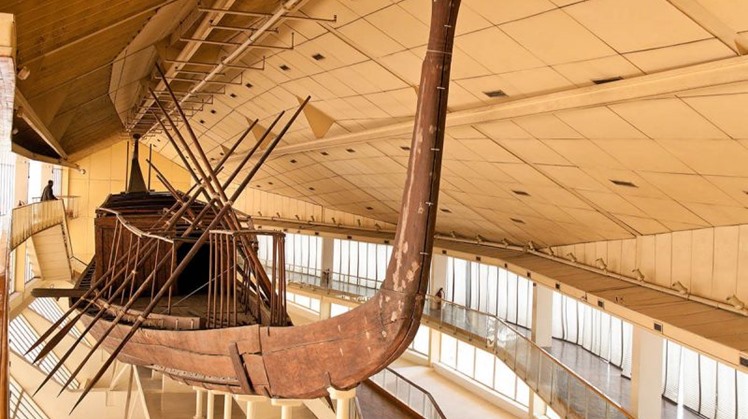 Sat, May. 1, 2021
The Ministry of Tourism and Antiquities has started the preparations for the transportation of the first Khufu boat, which is one of the most important discoveries of the twentieth century, which caused a great sensation in various countries of the world, due to its distinguished archaeological and heritage value for the history and ancient civilization such as the ancient Egyptian civilization, to become within the scenario of the show Museum in the Grand Egyptian Museum.

Khufu's first boat
The boat was wrapped using the latest internationally recognized scientific methods to preserve the safety of the boat during the transportation work, which will take place soon.

The transfer of the boat is the idea of ​​Major General Atef Moftah, the general supervisor of the Grand Egyptian Museum project and the surrounding area, and the reasons that made him think about moving the first Khufu boat from its current location to the Grand Museum was that the building in which the boat is currently displayed, which was built since More than a quarter of a century helped significantly to eliminate the southern rib of the most important monument in the world, which is the Great Pyramid, which clearly worked on the visual distortion of the archaeological area, as well as the presence of the boat in a building that lacks a distinct style of presentation and is not qualified to receive people with special needs.

Major General Atef Moftah explained that one of his most important priorities during the transport work is how to secure the boat in a scientifically sound manner, after the packaging and transportation works, explaining that the method and places of disassembly and recombination have been determined, and that the most important stage of the transport for him is the preservation and control of temperature, humidity and intensity Lighting throughout the work period so that the compound is not affected.

Major General Atef Moftah indicated that he had developed the new engineering design for the building in which the first and second King Khufu boat would be exhibited, in a manner based on the observance of accuracy and the distinguished scientific style in the museum display.

Regarding the second vessel of Khufu, Major General Atef Moftah explained that the work stages are proceeding in a scientifically sound manner according to the timetable, as the Egyptian-Japanese team succeeded in extracting more than 1,200 wooden pieces from the pit out of a total expected 1260 wooden pieces and the first restoration work was carried out for 1030 and transferred 834 woodblock to the big incognito.

The Japanese-Egyptian work team uses the three-dimensional imaging technique to document the wooden pieces of the second Khufu boat, after the completion of the first restoration work for it, and this technique is one of the best methods used in the documentation work, as it gives very accurate and clear details through which the piece can be seen from all Trends This is to photograph all the parts in preparation for assembling the composite parts on the computers before they must be assembled on reality and nature, thus fading into errors upon assembly.

The history of the discovery of the boat dates back to May 26, 1954 AD, when the engineer Kamal Al-Malakh announced a discovery that is one of the most important unique discoveries of King Khufu's relics, which is the discovery of two pits for King Khufu's boats, which were called the sun boat, which was found on the southern side of the Great Pyramid, and the work of Kamal Al-Malakh and Ahmed Youssef On the discovery, restoration and re-installation of the first boat, which came to light after it stayed in the ground for nearly 5,000 years, which is known as the sun's boat and is currently displayed in its museum, which was opened in 1982 AD.