A human and a cow skeleton from thousands of years ago in the lost city ... appear for the first time 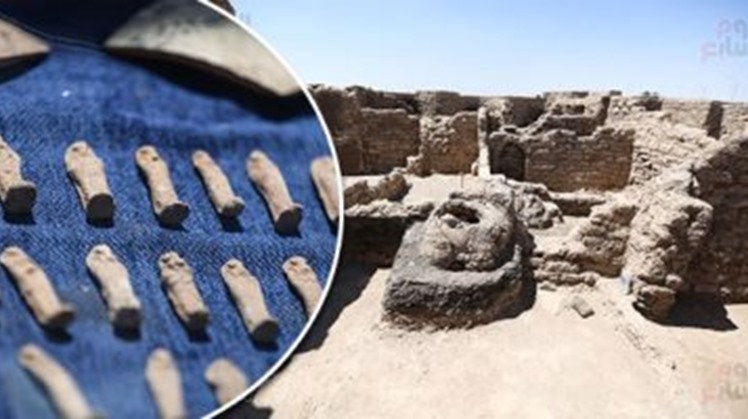 Mon, Apr. 12, 2021
The skeleton of a human being and a burial of a cow inside the lost city that was found by the Egyptian mission headed by Dr. Zahi Hawass, and the city dates back to the era of King Amenhotep III and continued work on it until the era of King Tutankhamun about 3000 years ago.

The archaeologist, al-Tayyib Muhammad, said that the Great Temple is one of the structures that have been discovered in the lost city, and a lot of mystery is wrapped around it, and it is similar to the screaming mummy through the mouth slot that resembles a mummy, and there are studies being done on the skeleton, as there are a number of interpretations about the temple due to A string of rope found around his legs, as some have interpreted that he had been subjected to punishment or that the rope was used to join his legs.

Al-Tayyib Muhammad pointed out that the discovered skeleton was buried with great care, and it is in good condition, compared to the skeletons that were discovered in the city.

Al-Arri on Abu Dashish indicated that from an inspection of the skeleton it indicates that it is a woman's skeleton and not a man, and that can be determined by the skull and the shape of the eyes, but there are studies that will be conducted by orthopedic specialists in the Egyptian mission.

As for the burial of the cow, the archaeologist, al-Tayyib Muhammad, said that the burial position of the cow is the first of its kind, and it was buried in a distinctive way, and it may have a relationship with Harhour, as a kind of sacredness, and all the results will appear through the studies that will be conducted during the coming days.

Dr. Zahi Hawass said during his tour with "The Seventh Day" in the lost city, that this city was responsible for supplying palaces and temples with what he needed from sacrifices or life inside the palace. Meat and salt is placed on it, and there is a text in it that talks about dried meat that was slaughtered in the room of a person called "Kha" who was the director of the royal palace of Amenhotep the Third and he has a tomb that was fully revealed in the Monastery of Medina and located in the Museum of Turin, and written inside the meat site the name of the butcher and a vessel inside which was 10.5 kilos of meat .

Dr. Zahi Hawass, head of the Egyptian mission, confirmed that the city all began in the era of King Amenhotep the Third and lasted 37 years, and the texts found inside confirm that he celebrated the “Sixth Love” festival to show his strength, the first after 30 years, the second after 34 years, and the third after 37 years. What is new inside them is that they are all named after "Aton" and inside them are views of Aton, and inside one of the houses are views of the disk of the sun, which confirms that Amenhotep the Third believed in the worship of Aton and not only Akhenaten, and said: “I think that Akhenaten deserted this city and went to Tell Amarna, and when Tutankhamun returned The rest of the disclosure will reveal new details, as well as the disclosure that shows the possibility of Nefertiti ruling the country or not, and what has come out inside the city so far precious stones, semiprecious stones, huge distinctive necklaces, fishing rods and a whole fish with gold on it, statues of Queen T and statues of deities such as Bas and Hathor, the goddess of love And beauty, Tauort, the goddess of birth, and a whole storehouse full of treasures and pottery, which may be very important artifacts inside Egyptian museums, and all the gold pieces that came out of huge rings with Amenhotep the Third on them, and all the possessions are in an entire store belonging to the city to preserve them.