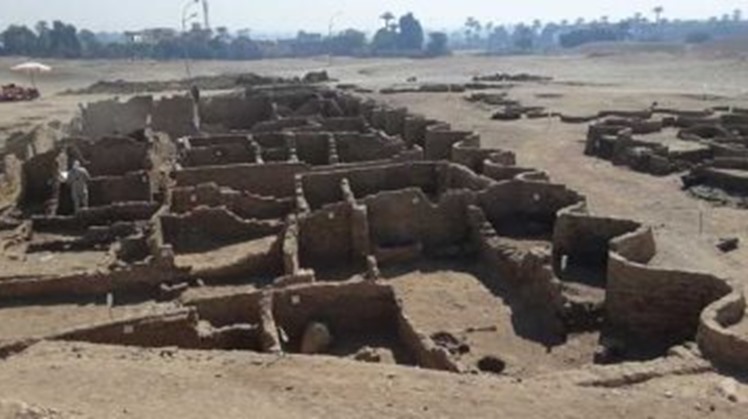 Mon, Apr. 12, 2021
There is no doubt that the discovery of the lost city through the Egyptian mission headed by the great archaeologist Dr. Zahi Hawass is one of the greatest archaeological discoveries of the ancient Egyptian civilization, and it is the largest residential, administrative and industrial city in ancient Egypt, located in the west of Luxor Governorate, and confirms that the western mainland was in it A life and not all burials were possible, as it is said, dating back to the era of the greatest king of Egypt, King Amenhotep III, who ruled Egypt from 1391 BC, but it was reported from some few people that this city was discovered before, and we review during the next report the comment of a number of foreign archaeologists And the Egyptians on the huge revelations.

Dr. Fikry Hassan, an archaeologist and Egyptologist, said that this discovery is great and amazing and is the culmination of the scientific path of the great scientist, Dr. Zahi Hawass, among the successes he has achieved in many other paths, and it is a clear and conclusive evidence of what a brilliant Egyptian can achieve.

While Salima Ikram, a professor of Egyptology at the American University, said, "We regret what is said by someone who is not aware of the antiquities anything, and it is better to ignore it, because no matter can be proven what he says, because it is fundamentally wrong and has nothing to do with science, so the lost city is a wonderful discovery." And important in the history of the ancient Egyptian civilization.

Archaeologist Vicky Johnson said that the claim that the lost city was discovered before is not true, as maps prove that the site of the discovery of the city is new and was discovered for the first time by the Egyptian mission headed by the great archaeologist Zahi Hawass, as the discovery is fabulous and wonderful on the western mainland in Luxor. And there was some discussion about the similarity between the settlement with the walls that the archaeologist Robichon and Farrell found in the 1990s, and a new area discovered by the Egyptian mission, so I took a Google Earth image for regions 4 and 5 of FIFAO 11 showing the workplace of Rubichon and Farrell, it is clear that they are two distinct and different sites , The newly cleared settlement indicated that the area had not been touched since ancient times, and while the architecture is similar and both of the two areas date back to Amenhotep III, it has yet to be seen through continuous excavations.

Betsy Bryan, an American Egyptologist, explained that the discovery is the second most important discovery after the tomb of Tutankhamun, and it is certainly no less important than the finding of a royal tomb, this industrial city fills a known gap between the palace of the king himself and the temple of Kom el-Whale, and it shows that the size of these The royal city was already comparable in size to Amarna and set a clear precedent for the coming city of Akhenaten.

She added, I personally did not see anything there or a storehouse that suggests a date after Akhenaten's departure to Amarna, and it is clear that the tombs date back to the late era, and they are just re-use of an abandoned city area suitable for use, and I have not seen any pottery from the era of Tut, but there are several layers of floors. Representing at least 11 years, and among the discoveries is a clay seal engraved with "Laaten". This deserves our full appreciation, as a discovery that will feed the research for some time in the future. The discovery is exceptional in terms of size and organization, it is amazing.

As the great archaeologist Zahi Hawass commented, saying: “When someone says these words, they must announce their discovery and the reference or article that talked about Medina, and whoever says this without sources is a vengeful and trivial person. The city was recently discovered by the Egyptian mission, and I have been working for more than 50 years in antiquities, and I do not say a discovery about a previously discovered place, and whoever says that reveals to us the article that talked about this topic, and here we discover a city in a place for the first time in which excavations are being made, and this These words are antoning of the criminals, and of people who have eaten fish, Tamarind milk. "