Procession of royal mummies .. 5 books about the greatness of Pharaonic history 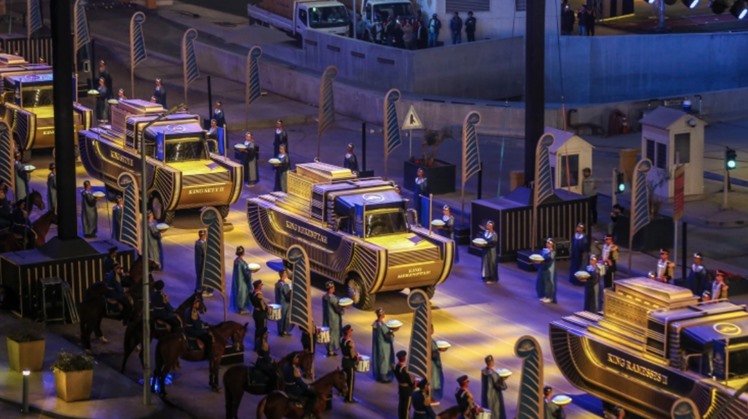 Tue, Apr. 6, 2021
As long as we talk about the greatness of the ancient Egyptian history, and how the ancestral civilization is the focus of attention from the whole world, and that everyone has a passion for everything related to the ancient Egyptian civilization, the event of the procession of the transfer of royal mummies from the Egyptian Museum in Tahrir to the National Museum of Egyptian Civilization in Fustat, to prove the evidence that Pharaohs and ancient history still attract the attention of the world and garner respect.

It is a huge historical encyclopedia written by the pioneering Egyptian archaeologist Dr. Selim Hassan, and this encyclopedia is considered the only integrated encyclopedia in ancient Egyptian history that was developed and composed by one single scientist, in which he dealt with a precise explanation and a thorough analysis of the stages of Egyptian civilization from pre-dynastic times to near the end The Ptolemaic era, in 16 volumes added to it in the edition of the Family Library within the Reading for All Festival in 2000, two additional parts are the Book of Ancient Egyptian Literature, bringing the number of encyclopedia's volumes to 18 volumes.

A book by the French Egyptologist "Jean Ferricotier", which was first published in 1946 and issued several editions, most recently in 1990, as the book takes you on a journey from before the establishment of the thirty ruling Pharaonic families to the period of the Persian occupation of Egypt and then finally to the Greek occupation led by Alexander the Great, which marked the end of the Pharaonic civilization completely.

3- The dawn of conscience

This book contains a comprehensive perception of the ancient Egyptian civilization and its origin, and the most prominent components of this civilization are morals or conscience, and Breasted has proven that the conscience of humanity began to form in Egypt before any country in the world, and that about 5000 years ago, written by James Henry Breasted, and translated by the Egyptian scientist The famous Selim Hassan in 1956.

In his book, Dr. Ahmed Fakhry traces the ancient history of Egypt, and explains the transformations he witnessed through the successive stages. The book begins its journey from prehistoric times, dealing with the nature of the land of Egypt and the geological eras that passed through it, moving to the pre-dynastic era, then the early dynastic era or the so-called "antiquity". After that the author lists the history of the dynasties in an interesting sequence showing from During it the wars that the Egyptians fought and the revolutions that they carried out, the facilities and landmarks that they established, and their story such as the pyramids and the Sphinx, as well as reviewing the internal conflicts over power.

5- History and civilization of ancient Egypt

Dr. Samir Adib passes through the history of Egypt quickly, and stops in telling its story in some incidents, and speaks briefly without prejudice to some aspects of its civilization, the writer pauses at the religions of the ancient Egyptians, recalling Akhenaten’s call to worship one god, a call that approaches monotheism that the books brought The book travels through historical ages until it reaches the Ptolemaic era and the founding of the city of Alexandria, and the sacred visit by Alexander the Great to the Temple of Amun in Siwa, and continues his journey through the Roman era and the persecution that the Copts suffered until the Islamic conquest came.