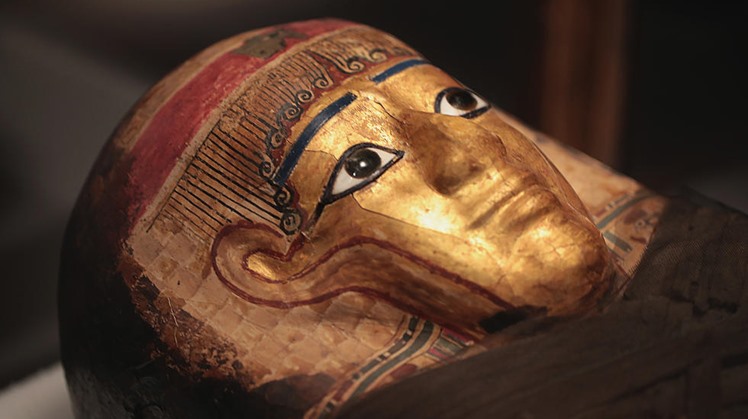 Sun, Feb. 21, 2021
The Metropolitan Museum of Art in New York City, one of the huge museums in the world, because it contains a large number of important archaeological holdings from all human civilizations, and dates back to the year 1870 AD, with the aim of opening a museum to provide art and art education to the American people, and with the anniversary of its official opening in such Today, February 20, 1872, we review the story of an Egyptian artifact that Egypt recovered after being displayed illegally in the museum, as a result of its smuggling from Egypt.

The beginning of the story goes back to the theft of the golden coffin of the ankh from Egypt in 2011, when the country was in a state of political and social turmoil, after the events of January 25, so that the Metropolitan Museum in New York bought the coffin from an art dealer in Paris in July 2017 for about 4 million dollars, from An antiquities dealer who held an exit permit for the piece issued from Egypt and dated to 1971.

Dr. Khaled Al-Anani, Minister of Tourism and Antiquities at the time, said that this was done through the Ministry of Foreign Affairs in cooperation with the Department of Recovered Antiquities and the American Antiquities Unit, as the latter requested verification of the authenticity of the export document of the coffin after displaying it in the Metropolitan Museum.

And after the investigations conducted by the Attorney General's Office of Manhattan, New York, which lasted for more than 20 months, during which the General Administration of Recovered Antiquities at the Ministry of Antiquities, in coordination with the Egyptian Ministry of Foreign Affairs, presented all the evidence and proof that prove beyond any doubt that the alleged permission for the exit of the piece in 1971 It was forged, and a permit was not issued by the Arab Republic of Egypt for this piece at all (before 1983, the law permitted the issuance of permits for some parts to exit outside Egypt).

Based on the documents sent by the Ministry of Antiquities, the Investigation Office concluded that Egypt has the right to recover this archaeological coffin, and that the export permit for it was forged, and the Metropolitan Museum was subjected to fraud when it was purchased, and in this context, the Director General of the Metropolitan Museum yesterday sent a letter to the Ministry of Antiquities In it, he confirms the museum’s apology to the Ministry, the government and the Egyptian people for the incident, and that the museum has already taken all measures to return the piece to its mother country, Egypt.

The coffin, in the form of a mummy, is 6 feet (2 meters) long and skillfully made of wood and metal. It is covered with sheets of gold, elaborately decorated with scenes and hieroglyphic texts that aim to guide the priest on his journey to eternal life, according to CNN reports. The gold in the sarcophagus refers to the priest's relationship to the Egyptian deities, as there was a widespread belief that the deities were made of the precious metal.

The Metropolitan Museum of Art in New York City is the largest art museum in the United States, and in 2019 it was visited by more than 6 million people, and on average it is visited by more than 5 million people annually, and it was the fourth most visited art museum in the world, its permanent collection contains more From 2 million pieces, divided into 17 halls, its permanent collection consists of artworks from classical antiquity and ancient Egypt, paintings and sculptures from nearly all European masters, and a wide range of American and modern art, and the museum also maintains extensive collections of African, Asian, Oceanian, Byzantine and Islamic art. .

The museum also houses large collections of musical instruments, costumes and accessories, as well as antique weapons and armor from around the world.