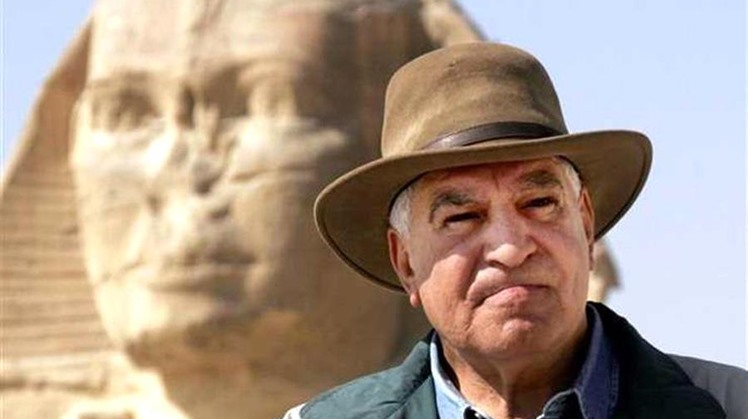 Wed, Feb. 17, 2021
Zahi Hawass, the former Minister of Antiquities, published on his Facebook page a scientific paper published by Frontiers in Medicine, which he carried out in cooperation with Dr. Sahar Selim, a professor of radiology at the Faculty of Medicine at Cairo University, related to the death of the Egyptian pharaoh Sqnen Ra.

According to the study, modern medical technology helped tell the story of a king in ancient Egypt who died in order to reunify Egypt in the sixteenth century BC, in the research published on February 17th in the journal Frontiers in Medicine.

It revolves around examining the mummy of King Seknen Ra - Taa II by CT scan, which was conducted by Dr. Zahi Hawass, an archaeologist, and Dr. Sahar Selim, a professor of radiology at the Faculty of Medicine, Cairo University.

Pharaoh Seknen Ra Taa II, called al-Shuja ', ruled southern Egypt during the occupation of the country by the Hyksos, who seized the delta in northern Egypt for a century (1650-1550 BC), and the mummy of Sqnen Ra was discovered in the cache of Deir el-Bahari in 1881, and it was He examined it for the first time at that time, as well as the mummy was studied by X-ray in the sixties of the last century, and these examinations indicated that the deceased king suffered several serious injuries to the head, but there are no wounds in the rest of the body, and theories differed as to the cause of the death of the king. He was killed in a battle, perhaps by the King of the Hyksos himself, and others indicated that Seknen Ra Taa II may have been killed by a conspiracy while he slept in his palace, and others suggested that the mummification may have taken place in a hurry away from the royal mummification workshop, due to the poor condition of the mummy.

And CT scan technology is one of the medical imaging techniques used to study archaeological remains, including mummies, safely and without interference, which helps to preserve them, and CT scans helped in studying many Egyptian royal mummies and determining age at death and gender, as well as how to die.

In their research, the two Egyptian researchers Zahi Hawass and Sahar Saleem presented a new interpretation of the events before and after the death of King Sqnan Ra, based on two- and three-dimensional CT images that were installed by advanced computer techniques. The deformation of the arms appears that it seems that the second Sqnen Ra - Taa II was actually captured in the square The battle, and his hands were tied behind his back, which prevented him from repelling the fierce attack from his face.

A CT scan of the mummy of Sqnen Ra Taa II revealed minute details of the head injuries, including wounds that had not been discovered in previous examinations that were cleverly hidden by embalmers.

The research included a study of different Hyksos weapons preserved in the Egyptian Museum in Cairo, including an ax, a spear and several daggers, and Sahar Saleem and Zahi Hawass confirmed the compatibility of these weapons with the wounds of Seknen Ra, and the results indicate that he was killed by multiple Hyksos attackers who killed him from different angles and with different weapons, so Saqnen was killed. Ra is rather a ceremonial execution.

A CT study also determined that Sagnin Ra was about forty years old at the time of his death, based on the shape of the bones (such as the pubic symphysis joint) that was revealed in the images, providing the most accurate estimate so far.

In addition, the computerized tomography study revealed important details about the embalming of the body of Seknen Ra Taa II, for example, the embalmed people used an advanced method to hide the wounds of the king's head under a layer of embalming material that works similarly to the fillings used in modern plastic surgery. This means that the mummification was actually done in a mummification workshop and not in a non-infectious place, as was previously explained.

This study provides important new details about a pivotal point in Egypt's long history. The death of Seqnen Ra Taa II motivated his successors to continue the struggle to unify Egypt and start the new kingdom, so the sons of Sqnen Ra Taa II continued the holy fight against the Hyksos.

And in a painting known as the Carnavaron stela, found in the Thebes Temple at Karnak, the battles fought by Camus, son of Seqnen Ra Taa II, against the Hyksos, Camus fell a martyr during the war against the Hyksos, and Ahmose, the second son of Seknen Ra Taa II, was the one who completed the expulsion of the Hyksos He fought them and defeated them and chased them until they eroded (Gaza is now in Palestine) and united Egypt.