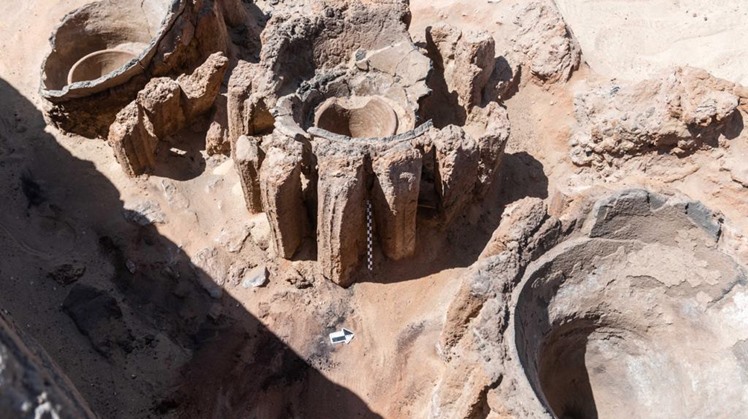 Wed, Feb. 17, 2021
The archaeological missions in Egypt continue their discoveries, and recently the joint Egyptian-American archaeological mission headed by Dr. Matthew Adams, from New York University, and Dr. Deborah Fishak, from Princeton University, working in North Abydos, Sohag Governorate, reached the disclosure of what is believed to be the oldest brewery factory. Beer "in the world.

It is likely that the factory dates back to the era of King Narmer, and that it consisted of eight large sectors with an area of ​​20 m length x 2.5 m width x 0.4 m depth that were used as units for the production of beer, as each sector contained about 40 pottery basins arranged in two rows to heat the mixture of grains and water. And each basin is fixed in place by means of clay supports and placed vertically in the form of rings.

The factory was producing about 22,400 thousand liters of beer at one time, and it may have been built in this place specifically to supply the royal rituals that were taking place inside the funerary facilities of the first kings of Egypt. Evidence for the use of beer in sacrificial rituals was found during excavations in these facilities.

For its part, the Ministry of Tourism and Antiquities said about the history of beer in ancient Egypt. Beer in ancient Egypt differs from this day a lot, and it provided the ancient Egyptian with energy and important nutrients. Evidence for beer manufacturing in ancient Egypt dates back to 3000 BC, and beer and bread were from The most important wages in ancient Egypt before money appeared, and beer was made from multiple elements such as: barley, wheat, dates and sometimes wheat, and the grains were hammered into a mortar with wooden hammers, then wet and kneaded and formed in the form of irregularly shaped loaves of bread and baked incompletely. Then these loaves are cut and sifted in a large saucepan, where they are kneaded again and the water or sugar water resulting from the date wort is added to them, and the dough is left to ferment and the fermented dough is filtered and the product is filled in clay pots. And beer was served mainly as an offering to the goddess Sekhmet.

The ancient Egyptian was interested in obtaining beer in the other world by engraving it from among the dozens of offerings that the deceased was keen to engrave on the walls of his tomb, and the stages of beer-making appeared on the walls of cemeteries since the ancient state, and from these cemeteries: the third cemetery of Marsa Ankh, and Sesham Nafar IV In Giza, Petah Sheets in Abu Sir, T., Ra Chips in Saqqara, and many more.