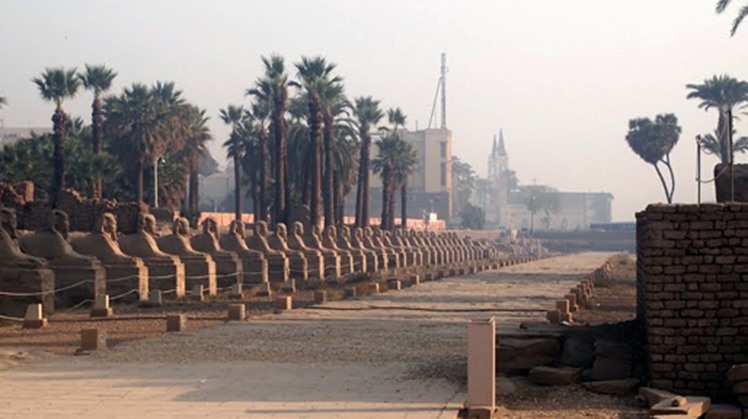 Wed, Jan. 6, 2021
The Karnak Temples area witnessed the largest national project to save 29 statues of rams inside the temples of Karnak, after the end of the complete restoration of the statues and protecting them from destruction, as after the transfer of 4 of the statues located behind the first pylon of the temple to decorate Tahrir Square, it was found that the rest of the statues suffer from great damage and destruction As a result of its poor transport and storage in that region since the seventies .. During the following lines we explain some information through the rams in Luxor ..

Q / What is the Rams Road in Luxor?
A: The Rams Road is the road that connects the Luxor Temple with the Karnak Temple. A wide street used to start from the beach, with statues of sphinxes, which we find in the Karnak temples, represented in the form of a sphinx with a ram's head, and the ram here symbolizes the god Amun, perhaps to protect the temple and highlight its axis. The ancient Egyptian called this road “Wat Nathr”, meaning the path of God. As for the road of rams in the temples of Karnak, it was known as “Ta-Mitt-Rahat. And translated by the Rams too.

Q: How did those rams look like?
A: These statues were carved from a single block of sandstone with a cornice engraved with the king's name and title and praise for him. His standing was on a stone base consisting of 4 courses of stone used due to the presence of some inscriptions and they were set up in two forms: First: They take the form of the body of a lion and the head of a human being The second (Sphinx): takes the shape of the body of a ram and the head of a ram as a symbol of the god Amun Ra.