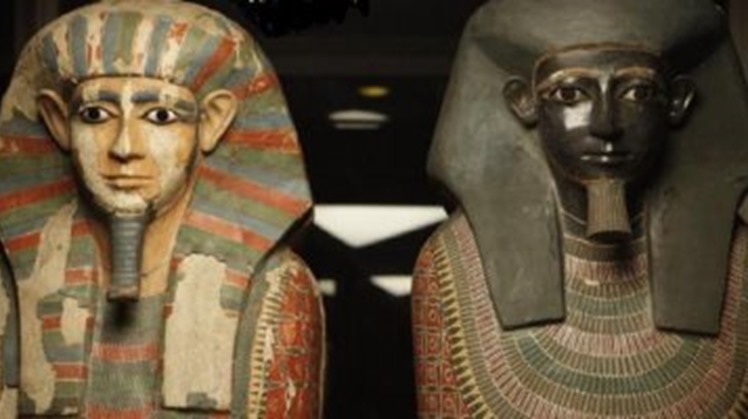 The mummies of the priests and priestesses of the god Amun were discovered in the royal cache in Deir el-Bahari in 1881 A.D. They belong to the mummy of Najm, the wife of Herihor, the chief priest of Amun, whose eyes were inlaid with white and black stones, which gives the feeling that she is still alive, and she wears wigs and eyebrows made of natural hair.

As for the mummy of Nasi Khonsu, the second wife of the high priest of Amun Banjum II, it is considered a distinct example of the development of the method of mummification of the family 21, as the eyes coveted with stones and the dark yellow color of the skin gave a sense of vitality and freshness.

Also on display in the museum will be the mummy of Panjum II, the high priest of Amun. The skin of the mummy was colored yellow and dark red, and the mummy was wrapped in thin linen with colored fringes.

As for the mummy of the grandfather of Ptah IUF Ankh of the 21st Dynasty, the fingers and toes are decorated with rings.

Finally, the museum will display the mummy of Hanutawi, the wife of the chief priest of Amun Panjum I, which is a mummy with a plump face to show vitality.

It is worth noting that the Museum of Egyptian Capitals narrates the history of the Egyptian capitals through different eras, as it consists of a main hall in which the effects of a number of ancient and modern Egyptian capitals are displayed, totaling 7 capitals: Memphis, Thebes, Tell Amarna, Alexandria, Islamic Cairo, Khedivial Cairo, in addition to Displaying a group of different holdings that represent the patterns of life in each historical period, specific to each capital, such as decorative tools, war and fighting tools, the regime and various correspondences.

As for the second section of the museum, it is a pavilion that represents the other world in the ancient Egyptian, and this part consists of the Tutu tomb that was discovered in 2018 in Sohag Governorate, in addition to a hall for mummies, coffins, and two fatters that contain canopic vessels and a set of fake doors and alternate heads that simulate religious rituals in Ancient Egypt.