Opening of the Nine Pyramids Lounge and the operation of the first environmentally friendly electric bus on the Pyramids Plateau. 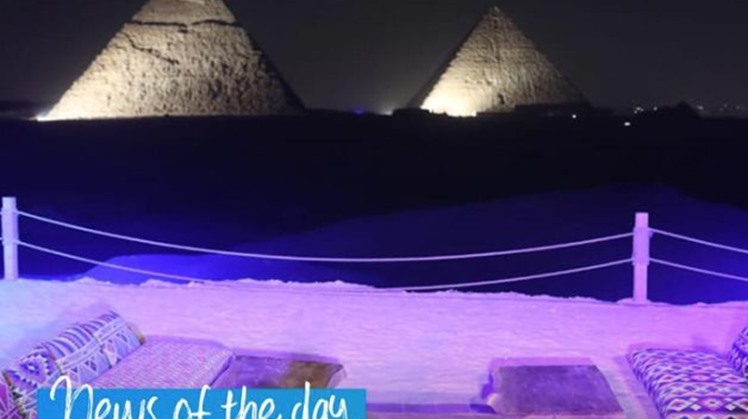 Thu, Oct. 22, 2020
Within the framework of joint cooperation between Orascom Pyramids for recreational projects and the Supreme Council of Antiquities; Egypt’s Minister of Tourism & Antiquities Khaled el-Enany attends the opening of the Nine Pyramids Lounge and witnesses the operation of the first environmentally friendly electric bus on the Pyramids Plateau.

Enany, accompanied by Chairman and CEO of the company Naguib Sawiris, along with the presence of more than 50 ambassadors from Foreign, Arab and African countries in Cairo, witnessed the start of the trial operation of the first environmentally friendly electric bus, which will be used in the path of the visit area through six main stations, as well as the opening of the first restaurant and lounge inside the Giza pyramids area.

Nine Pyramids Lounge and Restaurant, which is managed and supervised by the Orascom Investment Holding Company, is located on the southern side of the pyramids plateau and overlooks nine pyramids in a unique and picturesque view.

The total surface area of ​​the restaurant and rest is 1,341 square meters, which is divided into several areas, some covered and some exposed, two pergolas and a Bedouin area, in addition to a private car park attached to the restaurant.

Nine Pyramids Lounge and Restaurant provides its various services of unique meals and drinks, which possess the highest quality, in addition to the capacity of holding a number of special events, in the arms of the great Egyptian civilization.

The company is presenting the first model of an approved sales outlet for holders of licenses issued by the competent authorities only, as part of the development of the vendor system within the pyramids plateau in a distinct and upscale manner befitting the greatness and splendor of the ancient Egyptian civilization represented by all the antiquities contained in the region.

Furthermore, Enany stated that in light of the engineering completion of 100 percent of the project to develop the antiquities area of ​​the pyramids and raise the efficiency of services in it, which was implemented by the Armed Forces Engineering Authority with government funding, preparations are underway to continue operating the project and that there will be a visitation from the visitors' entrance from the Fayoum Road before mid-2021.

He said: "Today we announce the opening of the first tourist restaurant in the Panorama area of ​​the Pyramids Plateau - without any heavy building or construction in accordance with the requirements of the archaeological area - as the first fruits of the protocol for providing and operating services in the area between the Supreme Council of Antiquities and the Egyptian company, Orascom Investment Holding, which was signed in December 2018."

The Minister of Tourism and Antiquities added: “The restaurant is a simple wooden building with pillows spread on the ground, like the Bedouin style, in a unique location that sees all the pyramids of Giza.”

He also indicated the arrival of the first environmentally friendly electric tourist bus that will be used during the visit in the region after preventing the entry of vehicles and buses inside the archaeological area in order to preserve the antiquities, when the development project is completed and raising the efficiency of tourism services is opened before mid-2021.

The development project guarantees the provision of transportation within the archaeological area, including buses and vehicles powered by electricity and environmentally friendly energy, and the provision of mobile and self-cleaning toilets, while introducing fast food, food and beverage services in the area in the places specified and approved by the Supreme Council of Antiquities, and other agreed tourism services.

This is in the context of the ministry’s keenness to improve the quality of services provided to visitors in the region, which is one of the most important tourist destinations in the world.

Also, Enany stressed the Egyptian state’s keenness to have a tourist and archaeological infrastructure, which has a positive impact on the incoming tourism movement to Egypt, explaining that in conjunction with the completion of the project to develop the antiquities of the pyramid, increasing the capacity of Sphinx International Airport to double its capacity and opening it in 2021, the Grand Egyptian Museum will change the touristic map of Cairo.

Sawiris, chairman and CEO of Orascom Investment, said that the main goal that was set in mind since the first day of our entry into the project to manage and operate visitor services in the Giza pyramids area is to upgrade the services provided to a level befitting the civilization of Egypt and the greatness of this archaeological area while protecting it from pollution with all its kinds, maintaining the cleanliness and prestige of the place, and providing a unique and distinctive experience for tourists.