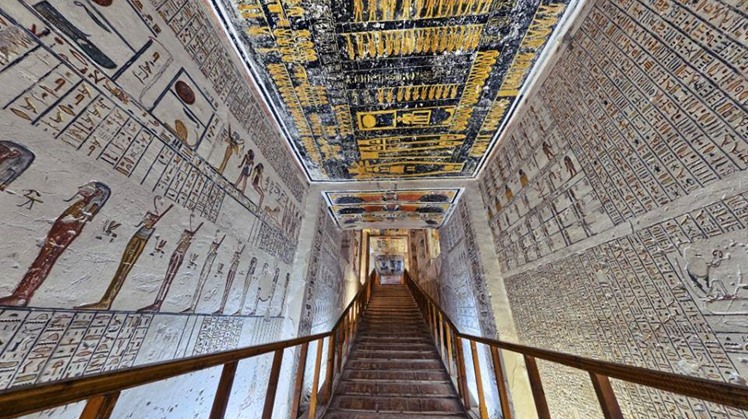 Tue, Oct. 20, 2020
The ancient Egyptians were keen to place religious books inside their tombs, especially in the era of the empire or the era of the modern state, and recently the book "two paths" was found inside the coffin of one of the newly discovered mummies of Saqqara, but the conversation here will deal with a tomb that contained nearly 6 religious books, so what are they The tale of that cemetery?

It is the tomb of Ramses VI, the son of King Ramses III, the last of the great pharaohs of Egypt, and Queen Isis Ta Ham Jat. He built a tomb for his mother in the Valley of the Queens in the western edge of Luxor, and he had to make his reign a great period, like his predecessors from the Ramesside kings, despite the short period of his reign. And the lack of resources during his reign.


Dr. Hussein Abdel-Basir, Egyptologist and director of the Museum of Antiquities of Alexandria, explained that Ramses VI reduced the number of workers and technicians working in the Deir el-Medina area on the western mainland of Luxor, and buried his predecessor and his nephew, King Ramses V, in an unknown cemetery in the Tiba cemetery, and raped the tomb of King Ramses The fifth for himself, expanded and adorned it, and completed the works that were started by his predecessors from the kings in the mortuary temple in the Qurna area on the western mainland of Luxor, and he wrote his name on some monuments instead of Kings Ramses IV and Ramses V.

After nearly 20 years have passed since the burial of King Ramses VI, his tomb was most likely stolen and looted by tomb and archaeological thieves, who tampered with my hand and presented the mummy of King Ramses VI to reach the royal jewels that were present in his tomb, and the mention of those events that occurred During the reign of Ramses XI in the Papyrus Mayer B, although the identification of the tomb mentioned in this source is not entirely certain to us.

Dr. Hussein Abdel-Basir indicated that the mummy of King Ramses VI was subsequently transferred to the cemetery 35 of the Valley of the Kings, which belongs to King Amenhotep the Second, during the reign of the priest King "Bingam" in the early era of the Twenty-first Dynasty, where Victor Loret discovered it in 1898 AD The medical examination of the mummy showed us that King Ramses VI had passed away at the age of forty years, and the studies that were done on the mummy of King Ramses VI showed that severe damage occurred in his mummy, and that an ax was broken by tomb robbers and monuments that hit the king's head and torso, and turned it into several pieces.

In 1898, Georges Emile Jules Darcy cleaned tomb No. 9 of the tombs of the Valley of the Kings, which had remained open since ancient times, and revealed parts of a large granite box, in addition to many pieces of the stone sarcophagus of the mummy of King Ramses VI, and there is a face The coffin is now in the British Museum in London, and the stone sarcophagus was restored in 2004 after two years of working on more than 250 pieces that were found in the cemetery where it is now displayed, and Egypt tried to return the face of the coffin from the British Museum to Egypt, but to no avail.