The launch of the 7th International Burullus Symposium for painting on walls & boats this Oct. 1 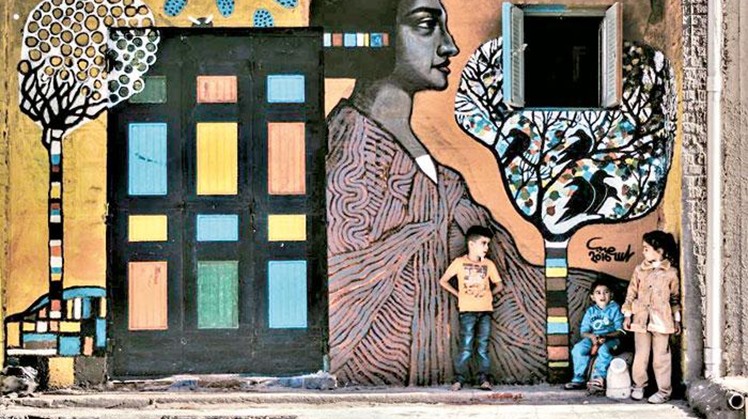 Mon, Sep. 28, 2020
The seventh international Burullus Symposium for painting on walls and boats will be launched on October 1 and will run until October 14, with the participation of more than 65 Egyptian artists, and more than 20 countries.

The forum presents painting on the walls of Burullus City in Kafr el-Sheikh Governorate, and drawing on boats, in addition to online activities with the participation of a number of countries.

In its seventh edition, the forum is sponsored by the International Organization for Migration, the United Nations Population Fund, the Battana Foundation for Publishing and Distribution, and the Azad Gallery of Art.

The Supreme Organizing Committee of the forum consists of artist Abdel Wahab Abdel Mohsen, the president of the Forum; artist Iman Ezzat; and Ramy Shehab, among others.

Abdel Mohsen launched the International Forum for Arts in Burullus 7 years ago, wanting to prove the ability of art to create a broad societal dialogue within villages and cities.

The experience does not only aim to unleash the artists to interact with the environment and practice street arts, but it also creates a direct interaction between the artist, and the people of the city.

Burullus is located in Kafr el-Sheikh Governorate, north of the Egyptian Delta. The Burullus Lake is located within the governorate boundaries with an area of 120 thousand acres.

The lake is connected to the Mediterranean Sea via Burullus Bogaz, which has a breadth of 44 meters.

Burullus people are famous for fishing, which makes simple wooden boats one of the signs of this small town.

It became one of the traditions of the forum to draw on boats, and later display them in a special exhibition in the Egyptian capital, Cairo. The proceeds of their sale go to the development of the city of Burullus.

The founder of the forum considers that the aesthetic and cultural messages of this annual global event are compelling.