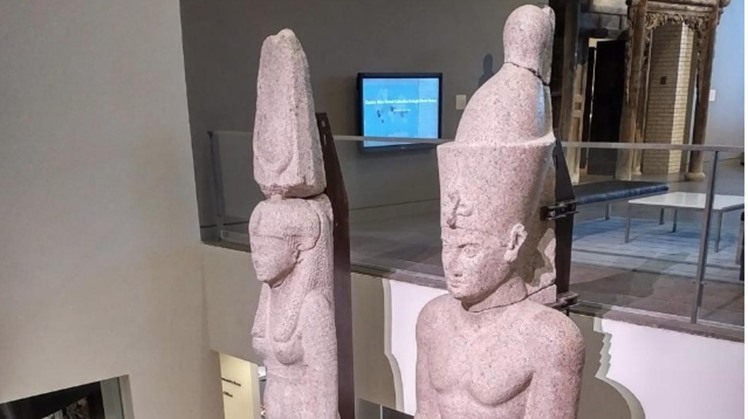 Thu, Aug. 6, 2020
Two royal statues arrived on August 6 to Egypt. The unique statues were included in the artifacts displayed in the exhibition "The Sunken Cities: The Enchanting World of Egypt" in the United States of America.

The statues will now be among the artifacts exhibited in the much-anticipated Grand Egyptian Museum, the largest museum in the world to be dedicated to one civilization.

Secretary-General of the Supreme Council of Antiquities Mostafa Waziri explained that these two statues were returned after approval by the Council of Ministers and will be transferred to the Grand Egyptian Museum.

Waziri further reiterated that the two statues were displayed within the exhibition "Sunken Cities: The Enchanting World of Egypt", which started its foreign tour in 2015, and visited Paris, London, Switzerland's Zurich and four cities in the United States of America. The exhibition also included 293 artifacts recovered from the sunken city of Heracleion in Abu Qir.

Moemen Othman, head of the Museums Sector, said that the statues depict a Ptolemaic king and queen and is made of pink granite; the length of each statue reaches about 5 meters.