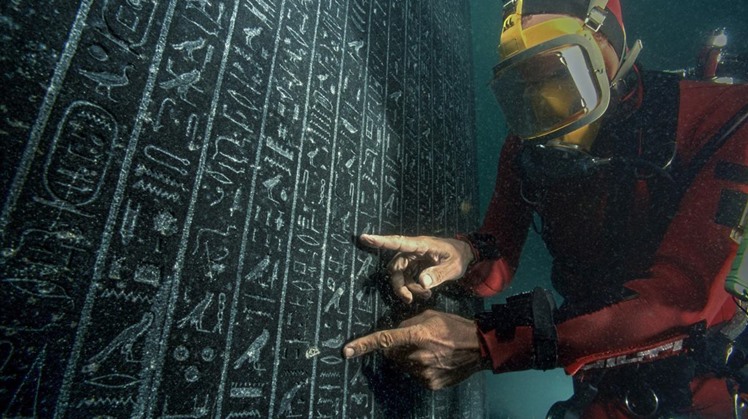 Mon, Jul. 27, 2020
The Virginia Museum of Fine Arts has reopened its doors with a bang with the blockbuster exhibit “Treasures of Ancient Egypt: Sunken Cities,” which began its run Saturday.

Visitors will see that immediately when they walk into the museum’s atrium and are greeted by Hapy, an 18-foot-tall statue of the god of fertility.

Hapy is the largest stone sculpture of a god ever found in Egypt and weighs over 5 tons. He’s just one of the nearly 300 objects excavated from the lost cities of Canopus and Thonis-Heracleion on view in the exhibit.


“When people come to this exhibition, they’re going to see amazing works of art that reveal the diversity of the ancient world and the ways that the civilizations of Egypt, Greece and Rome interacted and influenced each other more than 2,000 years ago,” said Peter Schertz, curator of the exhibit.

Unlike Babylon or Pompeii, Canopus and Thonis-Heracleion are two fairly unknown cities that vanished sometime around the end of the second century. Experts think the cities were struck by an earthquake and a tsunami before sinking into the sea. The cities were a mystery to many, lost to time. In the late 1700s, pieces of an Egyptian shrine were found, pointing the way for Franck Goddio and a team of underwater archaeologists to uncover the lost underwater cities in the early 2000s.

They found the treasures of a lost civilization, including the ruins of temples, pieces of pottery, jewelry, coins, lamps and statues such as Hapy and Osiris. These objects are now on view at the VMFA, along with photographs and videos of how the cities were discovered.

The exhibit showcases many of the secrets uncovered by the excavations, most notably delving into the mysteries of Osiris, one of the most important gods in ancient Egypt.

“Ancient Egypt is a civilization that grew up along the Nile in Africa, to either side is desert,” Schertz said. The flooding of the Nile was an important annual event and crucial for cultivation. With rainfall almost nonexistent in Egypt, the floods provided the only source of water for crops.

“The floods were a very important part of Egyptian life and their psyche,” Schertz said. “The main festival celebrated at the end of the flood season was called the Mysteries of Osiris. Just as they’re sowing a new crop, they want to make Osiris happy, as the god of rebirth and regeneration.”

According to ancient myths, Osiris ruled the land of Egypt and fathered a son, Horus, with his sister, Isis. Osiris was killed by his brother Set, who cut him into 14 pieces and scattered them around the world. Isis gathered the pieces of Osiris, reassembled them and wrapped them in linen, creating the first mummy, and then breathed life into him with her magic. Revived, Osiris became the god of the underworld and a symbol of resurrection and rebirth.

Osiris, his sister-wife Isis and their son, Horus, formed a sacred family and were worshipped across Egypt.

“The iconography of Isis sometimes shows her seated, nursing Horus. Many have argued that it’s the basis for the Madonna and child imagery,” Schertz said.

A part of the exhibit also explains why the Egyptian gods were often depicted with animal heads.

“It’s trying to describe something that can’t be described. Like the unknowable and unfathomable God in Judaism, these animals for Egyptians are answering the same function,” Schertz said.

For example, the warrior goddess Sekhmet is depicted with a feline head. “Cats are very fierce and protective of their young and their territory. Showing her as a cat conveys that,” Schertz said. “Horus was depicted as a falcon. They’re fast birds of prey, all-seeing; it’s a good metaphor for a ruler at that time.”

“Their animalistic qualities often convey something essential about the gods and distinguishes them from one another,” he added.

The exhibit also explores the religion of ancient Egypt and how the culture began to blend with the Greeks and Romans, as they began to conquer Egypt. During the Ptolemaic period, after the death of Alexander the Great, the leaders invented a cult and a god, called Serapis, which combined elements of traditional Egyptian iconography with Greek religion. The new religion bridged the two cultures and brought them together.

Many of the issues explored in the exhibit speak to today, such as cultural appropriation.

“With this exhibit, we can explore how cultures mingle together. We live in an age where culture is very contested. Walls are being put up to protect certain cultures and sometimes to keep other cultures out. Culture always intermingles, and it’s shown here in Egypt,” Schertz said.

Entry into “Sunken Cities” is timed and ticketed to ensure safe physical distancing. Masks are required at the museum. The facilities and campus are cleaned and sanitized daily, with high-touch areas and restrooms cleaned more frequently. Hand-sanitizing stations are available throughout the museum.

After “Sunken Cities” wraps up its VMFA visit, which has been extended until Jan. 18, 2021 and is organized by the European Institute for Underwater Archaeology, the exhibit will return to its home in Egypt.