"The Circus" by Adham Waely about the Egyptian local life 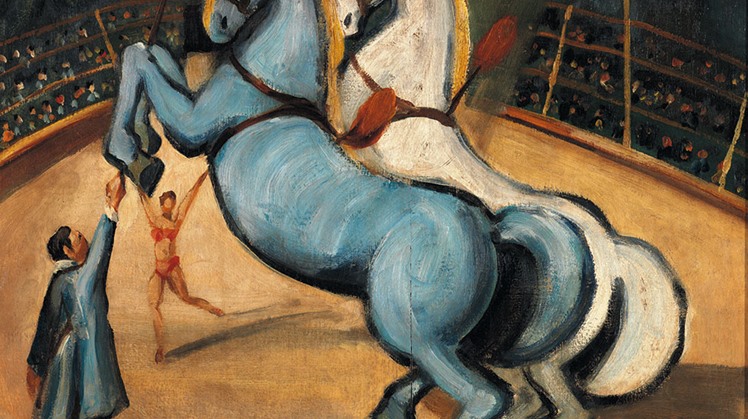 Wed, Jul. 15, 2020
Today, we see the painting "Circus" by the leading Egyptian artist, Adham Wanly, which he created in 1954, and through which he presents an important artwork, expressing a popular aspect that has his emotional qualifications in Egypt.

Ibrahim Adham Wanli was born in 1908 in the Muharram Bey neighborhood in Alexandria. His father, Ismail Bey Muhammad Wanli, was of Turkish origin and his mother, Esmat Hanim Dagestani, was of Caucasian origin.

Wanli had his first oil painting lessons with his brother Saif in the Italian painter Arturo Zanieri (1870-1955) who was also the teacher of the Alexandrian painter Mahmoud Said (1897-1964). In 1929, the Italian painter Autorino Biqui (1878-1949), who was educated at the Florence Academy, opened his studio in Alexandria, and the Wanli brothers were among his first students. When Becky closed his studio and locked back to Italy before World War II, the Wanli brothers and their friends, painter Ahmed Fahmy and film director Mohamed Bayoumi, opened their own in Alexandria in 1935.

Adham and his brother traveled during the fifties to several European countries, including France, Italy and Spain, where they completed many paintings and plans for the landscape, as well as ballet shows, opera and theater.
In 1957 the brothers Wanli were appointed professors at the Faculty of Fine Arts in Alexandria, which was founded in the same year by the sculptor Ahmed Othman (1907-1970), and two years later they were appointed by the Ministry of Culture to contribute to documenting the Nubian architectural heritage in Aswan before the waters of the High Dam were covered in this area. During this mission, along with many artists and professors of their generation, they completed numerous paintings and sketches of the original Nubian villages and ancient temples.

Adham Wanli died in 1959 and was fifty-one at the Mouwasat Hospital in Alexandria, and the street adjacent to his studio in Alexandria was named after him. Adham Wanli was like his brother Saif, a prolific artist, whose early works were influenced by his Italian teacher, Autorino Biqui, who was close to the Italian Machiaole movement, a group influenced by the French Impressionist movement and the Barbizon School. Becky pushed the two brothers to paint outside and capture light, colors, and shades in nature. Adham was later influenced by modern artistic currents, such as cubism and brutality.

Adham and his brother's passion for performing arts such as circus, ballet and theater, and we were able to capture the vibrant movements performed by artists during the performance.