Ahmose II: During his reign, Egypt witnessed prosperity and the consolidation of foreign relations. 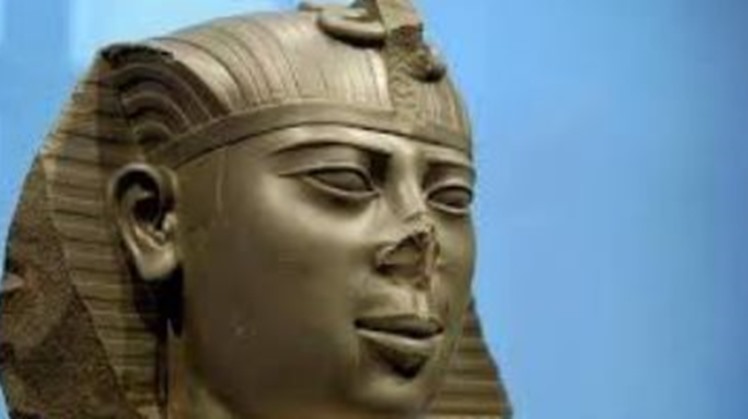 Mon, Jun. 29, 2020
King Ahmose the second or King Amazis is the second most important king in the twenty-sixth century family or the Sawy era after the founding king Bismatik I, and the rule of a long period of the Sawy era estimated at about forty-four years of the family’s life is estimated at one hundred and thirty-eight years, that is, a period of more than a third The age of the family, and his reign was the era of prosperity, sovereignty, prosperity, creativity, reconstruction, building, cooperation and communication with external powers.

The book, "The Pharaohs of Warriors .. Diplomats and Military" by Dr. Hussein Abdel-Basir, says that the royal capital, Sais, in the middle of the Egyptian delta flourished during the reign of King Ahmose the second Amazis, and the city was full of the Royal Cemetery tombs, but this city was not fully and thoroughly excavated, and we did not find It contains only a few statues of the Ushabti or the statues that were used by the ancient Egyptian to do the work on his behalf in the other world, and ten of those statues bear the name Bismatik, but it is difficult to determine its proportion to any of the three kings who carried the name Bismatik. There are six statues of the Ushabti bearing the name of King Ahmose the Second, Amazis.

The book "The Pharaohs of Warriors", and the famous Greek historian Herodotus, is one of the earliest sources of time that talked about the era of the twenty-sixth century family, as he had visited Egypt in the middle of the fifth century BC, i.e. about a century after the end of the twenty-sixth family of the zawiya, Herodotus mentioned many things about the reign of that king, and King Ahmose the second Amazis transferred mercenary soldiers from foreigners to the area of ​​Naqratis in the Lake District in the western delta, and gave them many privileges such as commercial rights, in order to avoid any problems and clashes with the Egyptian soldiers and the people Egypt in general, and during his reign, the Socrates became a free trade area like Delos in Greece, and at the end of the nineteenth century, the fossils of the most famous British archaeologist Sir William Flinders Petri in the city showed that they were cosmopolitan in nature and that their temples were dedicated to the community deities that were present It out.

Dr. Hussein Abdel-Basir added that what is calculated for the reign of King Ahmose the second Amazis is that trade in the Mediterranean was an important dimension of the Egyptian foreign policy in that period, and its consolidation was a necessity of the necessities of his prosperous and long reign, and it was also an essential task of the Egyptian fleet In the Mediterranean. Accordingly, cooperation and cooperation were carried out by a large number of nations in the Mediterranean, especially the Greeks, who made up a large proportion of the mercenary soldiers of the Egyptian army. The intense interference of King Ahmose the second Amazis in the Greek world was that he rebuilt the famous and great temple of revelation of Lord Apollo in Delphi after a massive fire came upon him and completely destroyed it in 548 before the birth of Jesus, peace be upon him.

The book “The Pharaohs of Warriors” continued, that after the Assyrian threat to Egypt before at the end of the twenty-fifth Nubian or Kushite family, it came after the Babylonian expansion and military activity in the ancient Near East, which caused anxiety and threat to Egypt Al-Zawiyah throughout the family era, but the scene witnessed a player New, powerful, and violent swallowed up all the old powers, established a new empire, and by that I mean the Persian Empire which fought the Greeks with cruelty.

The book “The Pharaohs of Warriors” indicated that, after the departure of the powerful military leader Ahmose II, Amazis was not a strong Egypt that might concern the Persians, so the famous Persian king Qambiz moved towards Egypt, and conquered Egypt in the year 526 before the birth of Jesus, peace be upon him, and defeated the king with your features The third, the son of the king, Ahmose the second, the Amazis, in the region of Farama, on the borders of the eastern gate of Egypt, and the weak and inexperienced third Smatech had succeeded his father, King Ahmose the second, the powerful Amazis for several months on the throne of Egypt. In his captivity he was sent to the capital of the famous Persian Empire in the city of Sousse, and thus came the end of the twenty-sixth dynasty at the hands of the Persians.