Egypt is the longest civilization in history, defending its lands against the invaders: Know the story in detail 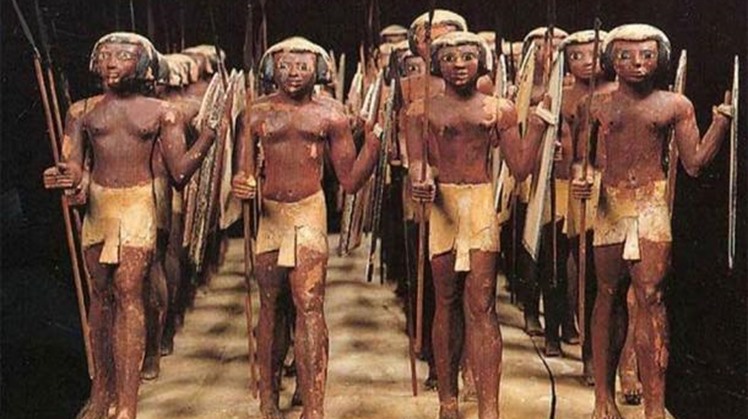 Mon, Jun. 29, 2020
In the history of the great ancient empires, there was one thing: war for the preservation of land, and Egypt is the longest civilization to have fought wars in its long history that spanned thousands of years in order to protect its land, the ancient Egyptians had many ups and downs and sometimes they lost everything and faced Destruction to ascend again stronger and more powerful.

Throughout the period of ancient Egyptian civilization they waged many wars, and they often defended their prosperous lands from foreign invaders. Of course, not all Egyptian wars are interesting but many of them were. The ancient-origins site summarizes the wars that ancient Egypt fought and how the Pharaohs managed to win using early forms Of organized military and tactical wars.

image007_74
The oldest ancient Egyptian wars
The conflict in ancient Egypt was part of its formation, beginning long before the unification of North and South Egypt in approximately 3150 B.C., and Egypt was the scene of the ongoing struggle between the tribes where many independent kings and rulers fought for sovereignty, and for a long time it was Upper (Southern) The lower (northern) two separate political and opposition entities are separated from the branches of the Nile.

The unification of these two entities occurred around 3100 BC, when the Pharaoh Narmer in Upper Egypt used superior military force to achieve complete sovereignty over all of Egypt.

It can be assumed that prior to Narmer's rule, war was common for several generations and the goal was always unification, and Narmer is today the first Egyptian leader to unite Upper and Lower Egypt and was awarded the title of "Lord of the Two Lands", and the Narmer dynasty was the first to rule ancient Egyptian civilization.

image008_69
The unification of Upper and Lower Egypt is perhaps the most important result of all conflicts in ancient Egyptian history, which led to three thousand years of development. During most of this time, Egypt was defined as a kingdom ruled by a pharaoh, and many families came and went, the transition between families in some The times are peaceful but not often, these stages of government were often separated by periods of instability, war and conflict.

And in ancient Egypt since about the middle of the twenty-sixth century BC, during the era of the second family, many scholars agree today that this period was marked by a severe civil war that was divided again between Upper and North Egypt.

It seems that the nature of this civil war was religious and consequently political, and what most scholars confirm is that the civil war ended the era of the last kings of the second family Khu Sukhm Wei, as he succeeded in suppressing the rebellion and united Egypt again.

One of the most important military projects in the period of the Old Kingdom in ancient Egypt was attributed to Senefru, the first pharaoh of the Fourth Dynasty, and Senefru was an important and powerful ruler, who led Egypt to a new era of prosperity, and one of his most famous achievements was building the pyramid, under his supervision, and the methods of building the pyramids greatly evolved .

Today, three monumental pyramids are attributed to his rule: the red, the curved, and the middle pyramids. However, creating these luxurious structures was not a simple task, it was a task that required many years of work, lots of resources, and above all a huge work force.

The next great war that struck ancient Egypt represents an important moment in its history. At some time in 1650 BC, invaders from West Asia waged a battle against Egypt, and this massive invasion preceded the influx of Canaanite immigrants, who settled in the Nile Delta region, and gained independence Partially, they subsequently usurped the ruling from the Egyptian ruling families.

The "Hyksos" overthrew the ruling pharaohs, the Egyptian government collapsed, and they founded the fifteenth dynasty. A large part of the Egyptian people managed to flee south to Thebes, where they eventually began opposing the invaders.

The rule of the Hyksos lasted almost a century, from 1650 to 1550 BC, it was a period of great change for the Egyptians, especially in the military field, Hyksos brought with them new bronze work techniques and new domestic animals and they built new pottery and many tools of warfare that the Egyptians successfully adopted, on In particular, the horse-drawn chariots, the compound bow.

In the end, the Egyptians won by the hero of the liberation war, "Ahmose", who expelled them from Egypt, and the antiquities are still keeping evidence of this.