Archeology: ready to open the Baron Palace and wait for the end of the Corona virus crisis 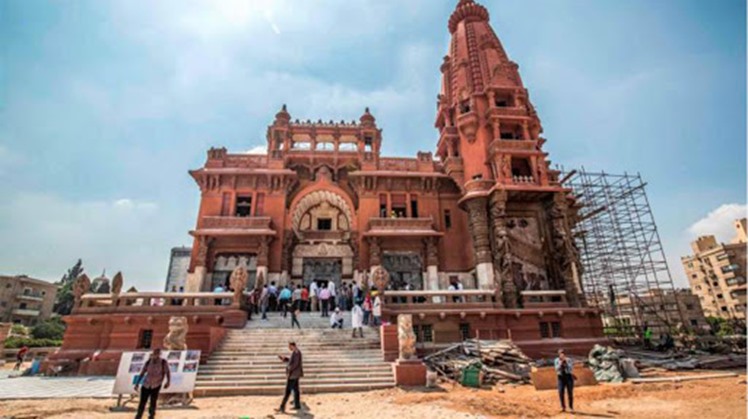 Sun, Apr. 19, 2020
Eng. Waed Abu Al-Ela, Head of the Central Department for Engineering Affairs, Projects of Antiquities and Museums, at the Ministry of Antiquities, said that all work has been completed in the Baron Palace, and it is ready for the opening, but the opening date will be determined according to the repercussions of the spread of the Corona virus spread throughout the world.

Eng. Waed Abu Al-Ela, in exclusive statements to "The Seventh Day", stated that the work inside and outside the Baron Palace was carried out in the latest internationally recognized scientific methods, as the project costed more than 100 million pounds.

And the prices of entry tickets to the palace will be accessible to all, and will be 100 pounds for the foreigner and 50 for the foreign student, and for the Egyptians 20 pounds and 10 for students, in addition to that all Egyptians over 60 years of the visit are free.

The restoration of the palace began under the supervision of the Engineering Authority of the Armed Forces, as the structural reinforcement of the palace ceilings was restored, finishing the facades, cleaning and restoring the decorative elements in it, completing the deficiencies of the doors and windows, completing the cleaning and restoration of the marble columns, wooden doors, metal windows, and restoring the decorative iron windows on the main facades and the panel The mural above the main entrance, and marble statues of the public site, indicating that work has begun to raise the efficiency of the public site of the palace and coordinate its garden.

Historical background of the palace
The historic Baron Palace is located in the heart of the Heliopolis area, specifically on Al-Oruba Street in Salah Salem. The Baron Palace has a style inspired by Indian architecture, and this is what attracts the attention of everyone who watches the palace, which was built by the Belgian millionaire Baron Edward Empain, "20 September 1852 - 22 July 1929 "

The Baron chose the Indian style for the design of the palace as he was living there, and he came to Egypt at the end of the nineteenth century shortly after the opening of the Suez Canal, and Edward Empain bore the title of Baron and was awarded to him by the King of France in appreciation of his efforts in creating the Paris metro.

Once Imban reached Egypt, he loved her to the point of madness and made a fateful decision to remain in it until his death, to the point that he recommended that he be buried even if he died outside of it, and from his love and love for Egypt he decided to build his residence there, so the Baron chose a place in the desert, near Cairo, to build the Baron Palace .

Indeed, the Baron offered the Egyptian government to establish a whole neighborhood in East Cairo, and chose a name for it, which is Heliopolis, the city of the sun, and the Baron bought acres with only one pound, as the region lacked the facilities, transportation, and services.

The Baron wanted to attract people to live in the new neighborhood, so he established a metro and took the name of the city the Heliopolis metro, as he commissioned the Belgian engineer André Brasilo who was working at that time with the Paris metro company to create a metro line linking the neighborhood or the new city to Cairo.

As for the palace, he decided to be legendary from which the sun never sets, as he entered it from all his rooms, and he became the most luxurious palaces in Egypt at all, and he drew his idea from the Anchor Wat temple in Cambodia and the Hindu temples of Orissa, designed by the French architect Alexander Marcel and decorated by George Louis Claude. The outer palace is decorated with statues of Indian elephants, and the windows rise and fall with Indian and Buddhist statues.

The palace, which was completed in 1911 AD, has an interior of small size, it does not exceed two floors and contains only 7 rooms. The first floor is a large hall and three rooms 2 of which are for hospitality and the third was used by Baron Empain as a hall for playing billiards, while the upper floor consists of 4 bedrooms for each bathroom attached to it. The floor of the palace is covered with marble and parquet, while the basement (basement) used to have kitchens, garages, and servants' rooms.